Attending a course at Windsor in October, there were encounters with all sorts of things that don’t come up in the average Church of Ireland parish. The music was at a different level, with composers’ names I had never heard. Discussions of the arts were in a language beyond me. 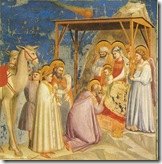 An Italian called Giotto was discussed at one point – I was almost tempted to ask if he played for Juventus, but suspected the attempt at a joke would fall flat. The conversation was about painting. A Google search later in the day revealed that he was from the late-Thirteenth and early-Fourteenth Centuries. The name came up in discussion later in the day and I admitted having checked him out on the Net. “He’s the guy who did the nice Christmas cards”, I smiled. The comment was thought very funny, I was being deadly serious! 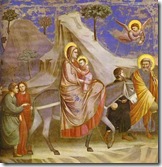 I thought about Giotto and the Christmas cards during the week. The Church spends much of its time at a different level from most people. Tell people that Giotto was a painter from 700 years ago, and most people will understand, especially if they recognize one of the cards on their mantlepiece as being the work of the artist; talk to people in the language that the church uses in its everyday worship and they will look at you blankly.

Attending a funeral of a working-class young man who had died in tragic circumstances, I sat at the back and watched his many friends. They took no part whatsoever in the service, they stood and looked impassive, no words and no expressions; what was happening simply did not engage with them. It might just as well have been a lecture on art for all the meaning it had. The only time they looked interested was when members of the young man’s family spoke, here was something they could understand.

Christmas is about God coming down to ordinary people. The church seems to have spent much of the time since then taking God away from ordinary people. Giotto might have more credibility in some circles if he had been a Juventus player, but at least he can be understood.

Can I be seen?

Can I be heard?

Can I be understood?

Do I have a message of hope?

We cannot talk about hope this Christmas if no-one understands us.