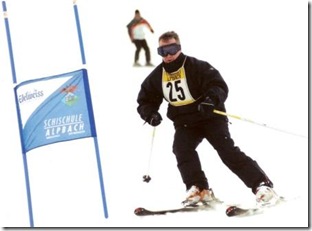 The feet are too far apart, the arms should be more tucked in, and the right ski should not be flat going around the gate.

I know I should really wear a crash helmet – even my instructor wore one.

I know the orange Rossignol boots don’t really co-ordinate with the black jacket and pants (which only matched because they happened to be discounted in end of season sales in different years- a Helly Hansen jacket for €100 couldn’t be missed) or with the smart black Rossignol skis, but those were the boots and skis that the hire shop gave me and I couldn’t really say that I didn’t like the colour. The boots were not only orange, they were a translucent orange, a bit like the orange sweets you got in a packet of Spangles.

. . . it was the only race I have ever won in my life. There might only have been five of us racing, and I might have clocked a slower time than the winner of the women’s race, but a win’s a win and at 20.53 seconds it was almost eight seconds faster than the time of 28.40 for the same course last year.

And if I don’t tell people, no-one else is going to!

(I even managed a smug smile for the photographer as I went through that gate ;-))