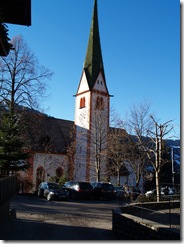 There are times when a CSE in General Science doesn’t really prepare one for the big big questions. Passing the grave of Erwin Schrödinger in Alpbach churchyard, I racked my brains as to what I knew about this Austrian winner of the Nobel Prize for Physics. Not much. Schrödinger’s Cat was all that came to mind, but what was it about Schrödinger’s Cat that was important: was it existing and not existing at the same time or being alive and dead at the same time?

Investigation only proved that the cat was never a cat in the first place, not in the sense of a four-legged furry animal. The cat was a thought experiment to prove some point in sub-atomic physics, and there I became lost,. This was beyond anything the science teacher ever talked about. In fact, our science teacher belonged to a fundamentalist Christian group, so anything scientific was probably ruled out. When you believe that the world began in 4004 BC, a thousand years after the Sumerians invented glue, there is not much space for physics.

Schrödinger was a close personal friend of Albert Einstein, (though with a less interesting hairstyle) and his life seemed filled with as much complexity as his science. He came to Dublin in 1940 to help establish the Dublin Institute for Advanced Studies, having fled from Germany in 1933 to escape the Nazis and then from Austria after the Nazis took over the country in 1938. Dublin in the 1940s must have seemed a repressive place for Schrödinger whose web of relationships was tangled, yet he became a naturalized Irish citizen and stayed in Ireland until his retirement.

In would be interesting to know what the bishops thought about this theoretical physicist and his unconventional ways. Nothing got past the eyes of the Catholic Church of the time, did Schrödinger’s science so intimidate them that they shied away from protesting over his private life?

Schrödinger returned to Austria after retirement, dying of TB in Vienna in 1961. He was taken up a little mountain valley far from his Viennese birthplace to his final resting place in Alpbach.