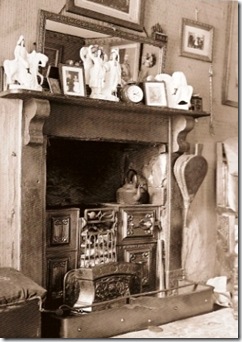 Mrs Holman, owner of the cottage in which Smith took a photograph of the fireplace in 1936 is a lady whose place tells much about its owner.

Mrs Holman lived in the little Somerset town of Crewkerne, a town that would have been a bustling and prosperous place, for there was enough work for the foundry that made the fine range that sits in her hearth.

Mrs Holman is a lady with a sense of the value of things rather than the price of things. A pair of horsemen sit either side of her mantlepiece, the rider to the right is headless, but what matters is that such heirlooms are preserved and passed on. It would have been alien to people of Mrs Holman’s generation to have gone to someone and asked, “How much is it worth?” Value was something far greater than price.

Mrs Holman’s family are central to her life. Sitting at her fireside each evening, she would have looked at the framed photographs lined up amongst the china, who was living and who was dead? We don’t know. In the 1930s, before the development of antibiotics, many lives were very short.

Mrs Holman is traditional in her politics. This is safe Tory territory and her mirror reflects a picture of the king. He was probably the old king by the time the photograph was taken, the young Edward VIII having acceded, for King George died in January and there is no fire in the hearth to suggest that the picture was taken so early in the year.

Mrs Holman is fastidious about timekeeping, the clock that sits on the mantlepiece is a big brass alarm clock. it shows just after quarter past two. Mr Smith probably arrived at two o’clock to take his photographs and Mrs Holman would have been waiting for the knock at the door.

Evocations of Place was a Christmas present. At £35 it was probably more than I would have thought of spending on a book, but Mrs Holman has been in my thoughts since yesterday – so much evoked in a single photograph which the Royal Institute of British Architects prosaically catalogues online under “Fireplaces”.