I went to school on Dartmoor. From November 1974 until June 1977, I attended a boarding school run by evangelical Christians. The school was intended to improve the health of the eighty sick and delicate boys who attended. Life was precarious for some, in the summer before I arrived two of the boys who would have been in my year died of asthma attacks. Dead at fourteen from an illness we would now regard as routine.

The regime was Spartan: exercises every morning, cross country runs on the moor, football and games encouraged in every spare moment. While seeking to restore bodily health, the school saw it as its mission to save our souls. There were services twice a day and prayers before every meal, mostly to no avail, we were a godless lot who became impervious to the preaching. I used to practice anagrams with the words of hymns, do you know how many words you can make from the word “teach”? 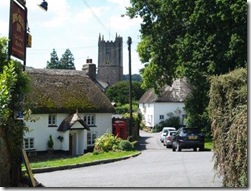 The lasting memories were not of the school, but of the moor.

We returned there one day last August, having lunch at North Bovey before driving to walk at Hound Tor.

The photographs with which I returned had a picture card sweetness about them. Not just the villages, but the moor itself had a tameness in the August sunshine. 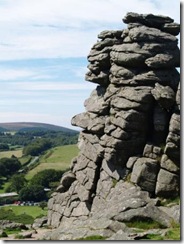 Hound Tor which looms dark and foreboding in the mists of a winter’s day had assumed a casual friendliness on that summer Sunday afternoon.

Inspired by looking through Edwin Smith’s Evocations of Place, I searched the bookshelves for pictures of Dartmoor that would evoke the place I knew.

Brian Carter captures a sense of the dark moodiness of the real moor in his photographic collection Dartmoor: The Threatened Wilderness published by Channel 4 back in 1987. The pictures from twenty years past could have been from forty years past or sixty years past and my favourite is not of a landscape but of three farmers on a narrow moorland lane. 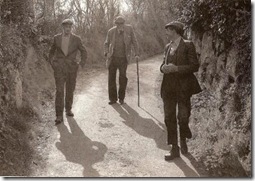 Carter’s caption reads, “Will Webber, Mr Fox-Pitt and Norman Mortimore discussing a grass sale, Chapple Gidleigh”. Even the nuanced wording of the caption captures a sense of English rural life.

The long shadows in Carter’s photograph seem almost prophetic of the evening of an age: I hope not.