The label “Soon to be banned in Canada” caught my eye.  Mark Steyn’s America Alone had clearly not been banned, for here it was in Chapters bookstore in downtown Vancouver.  Steyn is abrasive, sometimes aggressive and there is an urge to shout in protest at some of what he says, but the BBC news this morning carried the sort of story to which Steyn would point. 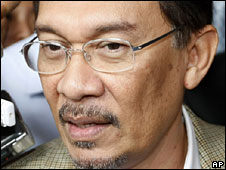 Malaysian police have released opposition leader Anwar Ibrahim on bail after he was arrested in connection with allegations of sodomy.

He was held for questioning over the allegations just hours before he had been due to make a police statement.

The former deputy prime minister, who could still face charges, has accused the government of orchestrating the allegations to discredit him.

“They have no case against me,” Mr Anwar told reporters after his release.

The 60-year-old has been in a tense stand-off with police since a former male aide accused him of sodomy two weeks ago.

Sodomy, even between consenting adults, is a crime in Malaysia and is punishable by 20 years’ imprisonment in the Muslim-majority country.

His arrest is likely to exacerbate the political tensions that have emerged since the opposition’s unprecedented gains in the general election of March 2008.

What is the liberal response to such stories?

Were it a story of a “Christian” regime oppressing people because of their sexuality, it is hard to imagine that the voices of protest would not have been much louder.  If George Bush’s United States locked people up for being gay, it would seem likely that even RTE news would have devoted less time to such matters as a developer deciding not to build on a golf course after all.

Liberals seem caught in a cleft stick.  Advocacy of the very causes that have been espoused by liberal opinion is restricted by the strictures of “tolerance”; such tolerance often tending to be only directed in certain directions.

Steyn argues in the prologue to his book,

The refined antennae of Western lib­erals mean that whenever one raises the question of whether there will be any Italians living in the geographical zone marked as Italy a gener­ation or three hence, they cry, “Racism!” To agitate about what propor­tion of the population is “white” is grotesque and inappropriate. But it’s not about race; it’s about culture. If 100 percent of your population believes in liberal pluralist democracy, it doesn’t matter whether 70 per­cent of them are “white” or only 5 percent are. But if one part of your population believes in liberal pluralist democracy and the other doesn’t, then it becomes a matter of great importance whether the part that does is 90 percent of the population or only 60 percent, or 50, or 45 percent. Which is why that question lies at the heart of almost any big interna­tional news story of recent years-the French riots, the attacks on Dan­ish embassies and consulates over the publication of cartoons of Mohammed, the murder of Dutch filmmaker Theo van Gogh, Turkey’s membership in the European Union, Pakistani riots over Newsweek’s Koran-down-the-toilet story. Whenever I make that point, lefties always respond, “Oh, well, that’s typical right-wing racism.” In fact, it ought to be the Left’s issue. I’m a “social conservative.” When the mullahs take over, I’ll grow my beard a little fuller, get a couple extra wives, and keep my head down. It’s the feminists and gays who’ll have a tougher time. If, say, three of the five judges on the Massachusetts Supreme Court are Muslim, what are the chances of them approving “gay marriage”? That’s the scenario Europe’s looking at a few years down the road.

Being a libertarian, brought up to live and let live and being educated in the tradition of John Stuart Mill, which allows people freedom to the point where their exercise of freedom does not impinge upon the freedom of others, I am amongst those whom Steyn would accuse of a lack of will.  Living on a small island in the North Atlantic, at an airline flight’s removal from the issues, perhaps I can afford to sit and say nothing.