Back in the late 1980s I had a friend who was a very good amateur photographer – he even had a couple of exhibitions. Inspired by his efforts, for a while I would photograph odd stuff. I liked splashes of colour and things with strong shapes. The Best Beloved had an excellent SLR camera that could compensate for my ineptitude. I had photographs of gates to farmers’ fields, of roadside advertising hoardings, of street scenes.

The efforts came to an end – partly because it was expensive to get photographs developed, partly because they looked odd in albums, and chiefly because I used to leave my car unlocked in the grounds of our country Rectory and someone made off with the camera (together with twenty Irish punts and an excellent bottle of Taylor’s port).

Two years ago, I bought a digital camera, since which time hundreds of images have accumulated. Finally, it seemed it was time to give some of them some degree of permanence. The best of the holiday pictures from 2006 and 2007 were uploaded to my Snapfish account – but even with the cost of each print being only 9 cent, there still seemed a lot of pictures that weren’t worth getting printed. There would be nowhere to put the prints anyway – I mean to say, where would you put a collection of pictures of French signs? Or pictures of French crosses?

The question brought thoughts of Garrison Keillor’s Radio Romance. It begins in those days when every word broadcast was weighty, when everything was carefully considered, when no opportunity to be on air could be treated trivially. But soon the airwaves are filled with countless words, with pointless words, with words used in a profligate way. The seriousness and the weightiness was lost.

Look at photographs from the past, the stilted portraits, the occasional glimpses into daily life captured by a few skilled photographers, every picture counted. Now there are billions of images, pictures in over abundance.

The pictures are not as plentiful as the words, but they have little more value.

Is there a land like the one of lost socks, where one can send the unwanted? 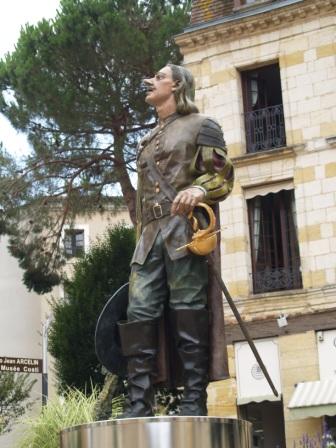