“Accident ruled every corner of the universe except the chambers of the human heart”.

Snow Falling on Cedars, David Guterson’s novel, was discussed at our parish book club last night, posing the question as to whether life was just a series of accidents, shaped by random occurrences and whether the only things that could be shaped were thoughts and emotions.

If Guterson’s contention is that our only power is in shaping our own thinking, then his character Etta Heine, a bitter racist and bully, becomes all the more frightening. Does Etta Heine choose to become an irredeemable character, imprisoned in her own prejudice?

If the chambers of the human heart are still governed by choice, then why do some choose ways of darkness and others light? Maybe even within our deep emotions, accident plays a not inconsiderable part? 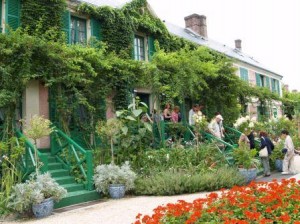 What is it that impels some to produce beauty while others spread darkness?

On the first Saturday in August two years ago, accident brought us to the French village of Giverny, to the home and garden of Claude Monet.

Monet’s work now sells for unimaginable figures, one painting of water lilies knocked down for £40 million at auction in June, but what if Monet’s background had been different? What if he had not spent decades in beautiful countryside, surrounded by creative friends? Isn’t it easier for the chambers of the human heart to exude light and colour and beauty when surrounded by people who create those things? The list of visitors to Giverny readslike a Who’s Who? of the art world of the time 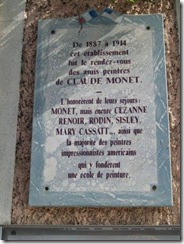 Had Monet been born into a different environment, had he met different people, had he pursued a different career, would we now know anything of the beauty he created? Are the choices available more complex than Guterson suggests: is it more than just a case of accidental external nurture versus chosen internal nature? Do we not make choices of the nurture to which we subject ourselves? Monet surrounds himself with people of light and colour, nurture that is more than just a matter of accident. 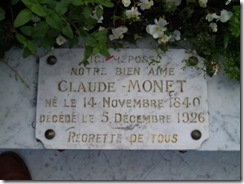 In the little churchyard at Giverny, Monet is buried in the family grave. A simple stone attached to the surround of the plot commemorates a man who, even in his own time, was one of the greatest artists in history. “Regrette de tous” would express the true thoughts of the community, they had been graced by his presence. But what about all the people like Etta Heine in the world? What about those whose lives have been marked by bitterness and resentment? Do they even end their lives as unloved, as unregretted by all? Do we recognize that even in the worst of people there is the capacity to aspire to the beauty and colour of a Monet, or do we believe that “accident ruled every corner of the universe except the chambers of the human heart”?