It was a day for driving through the past. Across the border by ten o’clock, and swinging right towards the Kingdom of Mourne. At the little church at Tullybrannigan outside of Newcastle, we placed flowers on Pat’s grave. A stern, granite Celtic cross marks the family plot; a “Popish” innovation at the time Uncle Tom died. Lunch in Dundrum, before following the coast along the shoreline at Tyrella, where the trees grow sideways in the sea winds.

The country became familiar as we reached Rossglass and the boundary of the parish where I worked for seven years. Over the hill into Killough, which has become as picturesque a village as you will find anywhere on the Irish coast. Passing down the street, I threw a fond glance at the little parish church on the harbour where I worked for seven years.

We drove on through Ardglass and then to Strangford for the ferry to the Ards. The ferry laboured against a rushing flood tide as it came across from Portaferry, and then flew across with the tide as it took us to the far shore. The drive alongside the inside of the peninsula was filled with beauty; land and sky and water, as the road picked its way along the lough shore.

Through Newtownards, where I trained as a curate and then westwards, skirting Belfast, to a little churchyard at Kilwarlin, west of Hillsborough. It will be two years at the end of the month since we said ‘Goodbye’ to Peggy. We arranged the roses in the vase – reds and oranges and pinks. I had been tempted to buy some orange lilies. “D’ye like these, Peggy? D’ye not think they’d look great on the lodge banner?” She would have laughed, but sometimes you have to be serious as well as silly.

A squirrel sat and watched from the graveyard wall, before disappearing into the trees. Had he sat long enough, he would have seen many sad moments on this little patch of ground. I stood at the grave of a policeman, a family man, a good man, who had been murdered by the IRA; the scars in these little communities run deep.

Then it was time to turn south, to come back to Dublin to resume the things of the present time. Searching for lines to capture the day, I opened Seamus Heaney’s Door Into the Dark. Heaney captures the Ards as only Heaney could:

When you have nothing more to say, just drive
For a day all round the peninsula.
The sky is tall as over a runway,
The land without marks, so you will not arrive

But pass through, though always skirting landfall.
At dusk, horizons drink down sea and hill,
The ploughed field swallows the whitewashed gable
And you’re in the dark again. Now recall

The glazed foreshore and silhouetted log,
That rock where breakers shredded into rags,
The leggy birds stilted on their own legs,
Islands riding themselves out into the fog,

And drive back home, still with nothing to say
Except that now you will uncode all landscapes
By this: things founded clean on their own shapes,
Water and ground in their extremity. 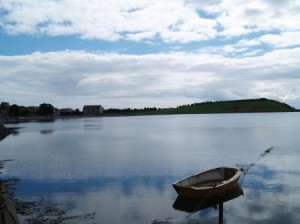