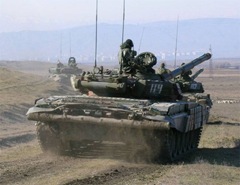 Do you remember the T-72 tank?

It was the one that was going to roll across the Iron Curtain from the old East Germany and precipitate the Third World War.

When the Cold War ended, there must have been a great surplus of T-72 tanks and no-one in Europe particularly interested in buying them

Everything has a price though, and some enterprising Ukrainian must have been delighted to find a client who would take thirty-three of these monsters off of his hands.  It must have seemed a shrewd piece of business until Somalia’s answer to Jack Sparrow stole the ship carrying the tanks.

Somali pirates have been active for years, but this time they have trodden on very large toes – both the Russians and the Americans have sent warships, even Sparrow would be hard-pressed to extricate himself from this one.

But what about those tanks?

Who in their right mind in east Africa would want thirty-three T-72 tanks?  Kenya claim they were buying them, but what for?  Why would Kenya want them?

Clearly, other people have asked the question, and come to conclusions that have enraged the Kenyan authorities.  The BBC reports:

. . .  authorities in Kenya have charged a maritime official who said that the battle tanks were destined for southern Sudan, rather than Kenya.

Andrew Mwangura – the spokesman for the Kenyan chapter of the Seafarers Assistance Programme – was charged on Thursday with making alarming statements.  Mr Mwangura was also accused of illegal possession of drugs. He denies both charges.

Police want to hold Mr Mwangura for five days, saying he has vital information they want to question him about, the BBC’s Joseph Odhiambo reports from Kenya.

The claim that the tanks on board the Ukrainian ship were going to South Sudan has been strongly denied by Kenyan and Ukrainian authorities.

But Western sources, who spoke on condition of anonymity, told the BBC that the tanks on board the ship were bound for the autonomous government of South Sudan, in possible contravention of a peace accord.

If the Kenyan government sticks to its line and prosecutes Mr Mwangura, then perhaps Europeans, whose governments are pour millions in aid into Kenya, might wish to ask public representatives why governments are aiding an administration which is spending precious money on buying tanks?

No-one is threatening Kenya and Kenya is hardly going to be tempted to invade its neighbours; and it’s not even as though these machines could be used for civil policing, they are battle tanks, not armoured cars.  Which story seems more likely, that of a humble seafarers’ welfare officer who has nothing to gain, or that of politicians embarrassed by the affair?

Someone is telling stories, and in the meantime some of the poorest people on Earth continue to die.