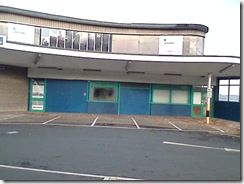 Samhain – the first day of winter.

The first time for walking the East Pier in Dun Laoghaire alone; Herself having gone on hospital duties.

There are just three cars at the Carlisle Pier car park; it is midday on a bright Saturday.  The long since closed ferry terminal continues to decay, in places decay has become dereliction.  The proposals for luxury apartments and a maritime centre become unviable in a context of economic chaos; much of which was coming before anyone had heard the term “credit crunch”.  What did David McWilliams warn us about an economy which reached the point where the only growth area was builders building houses for builders to live in?

Perhaps it is the credit crunch, perhaps everyone is sleeping in after Halloween parties, but there are no more than a few dozen people on the pier.  There is a cutting wind and south Dublin’s finest winter wear is on display.

The Cafe Le Creme trailer is open; its usual complement of staff cut from two to one.  It is one of those days when in times past you would have bought a mug of Bovril if you were at a football match.  Funny to think that there was a time when ordinary working class blokes could afford to go to football matches played by the big English clubs.  Now it’s watched on a big screen in the pub over two pints of lager; going to the real thing would be £50 Sterling just to get into the ground.

No Bovril on Dun Laoghaire pier though; coffee with various Italian names and an exotic choice of ice cream.

“Yes”, says the woman at the counter.

The woman is one of the Eastern Europeans who keep the economy going.  When there were more jobs in the country than people to fill them and when tens of thousands were arriving from Poland and the Baltic countries in 2004 and afterwards, there was still officially 4% unemployment in the country.  Now the Government is announcing levels of 6-7% unemployment, there is a certain logic in deducting 4%  from that figure to know how many additional people have become unemployed.

Sitting on one of the blue-painted benches on the upper level, there is a view across to the Dublin docklands.  A cluster of cranes remains close to the quays; perhaps a sign of defiant optimism.

A flotilla of dinghies with garish coloured sails appears from behind the Carlisle Pier.  Initially six, three with sails that are a very loud shade of pink and three with blue-green sails; then six more, three with a natty red and blue combinations and three with white; they seem to race around and around a very tight course, one side of the boat skimming the water as they turn sharply.  It seems like going skiing and doing nothing but slalom courses.  Is there nothing in dinghy racing like a long downhill run?

Apart from the dinghies, the harbour is all but empty of boats; wasn’t this once one of the busiest ports in Ireland?  There is still a connection to Holyhead in north Wales; still a small fishing fleet; and still the Irish Lights boat that services the buoys around the coast of Ireland, but, when one looks at the old postcards, it is a pale shadow of the past.

Sitting on the bench allows the overhearing of snatches of conversation: mostly the discussion of social events, it seems, and lots of laughter.  It is the laughter that makes this country so special.

A man and his wife walk landwards at a brisk pace.  He has a shock of brilliant white hair that is whipped by the wind. “Gee,” he says, “It’s going to be a long winter”.