Wally was always an appealing character.  He looked like the sort of bloke one might meet on the terraces of a football ground; no matter that he was dressed in Arsenal colours, those big glasses were a sure sign that he was not aggressive (aggressive blokes didn’t wear glasses, they were a danger when fists started to fly), and that he would be full of interesting stories about matches and statistics.

Wally has done well in the publishing business, a worldwide phenomenon translated into dozens of languages.  Last week the Daily Telegraph began a competition in association with Borders Books and Google Earth in which entrants sought Wally in diverse locations; Wally had reached new heights.

Thanks for joining me on my new adventure. Come and find me on Google Earth as I jet across the globe to seven great destinations in seven fun-filled days. If you can find me, you can win a holiday to one of the great places I visit on my travels. I can’t say which as that will give the game away! Just use the clues to track me as I travel from place to place! The first clue is published in the Daily Telegraph on Monday 3rd November and then a clue a day will be revealed on the Borders website, www.borders.co.uk/whereswally.  You will need to enter the longitude and latitude reference from all seven of my locations on Google Earth to be in with a chance of winning the holiday, or enter the longitude and latitude reference of the daily clue to go into a daily prize draw to win Wally goodies!
Also, don’t forget to buy the Daily Telegraph on Saturday 1st November to claim your free Where’s Wally? Book from Borders stores.

Wally isn’t just appearing on Google Earth, though, he has made it into the columns of serious book reviews.

Gathering up the last remnants of the papers from Saturday, 1st November, a reference to the Irish Hellfire Club caught the eye.  The Hellfire Club is a popular walking spot; it is a derelict 18th Century building in the Dublin mountains.

What was the piece about?

It was a review of Evelyn Lord’s The Hell Fire Clubs: Sex, Satanism and Secret Societies (Yale University Press, £19.99).  The review comments that “In the absence of fact, the hacks’ embellishments are all she really has to offer, presented somewhat confusedly, and accompanied by clunking explanation.” It seems an unduly harsh judgment; given that secret societies do not actually have any secrets, it is the embellishments, the myths that become attached to such societies, that are the interesting stuff.

In the concluding paragraph, the reviewer writes, “Lord is high minded and solemnly pedantic, and her book is panoplied with an impressive-looking scholarly apparatus, as befits a publication of Yale University”.

The review is accompanied by a picture of the etching “The Diabolical Maskquerade” from the British Museum.  Except there is an addition to the Daily Telegraph version.

Here is the British Museum original. Compare it with the picture carried by the Daily Telegraph. Were I of such stature that I was considered “high-minded”, I think I would object to a Wally. 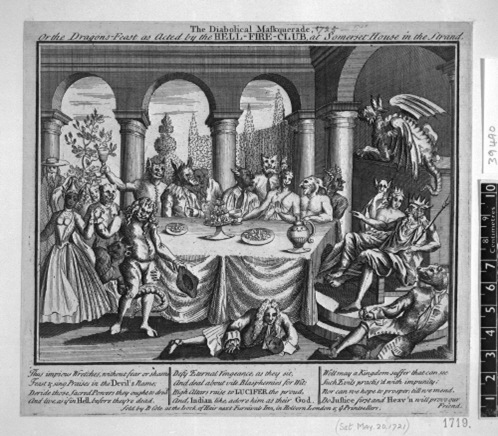 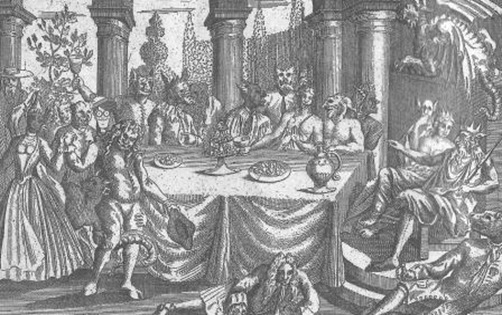