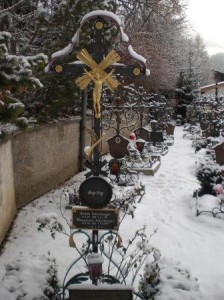 “When they found him, they said to him, ‘Everyone is searching for you.’ ”

We paid our respects to Erwin Schroedinger last month. His grave is beside the churchyard wall in the little Austrian village of Alpbach; there is nothing to mark it as different from others except a mathematical formula and an inscription on his memorial that seemed to be from a piece of scientific writing. Standing at the grave, a Welshman came and stood beside us, asking if we spoke German. He was looking for someone who would translate the inscription; we apologized at having not a word of the language.

The Welshman was an officer with Devon and Cornwall police, based at Holsworthy in Devon, but by qualification, he was a physicist. Our previous knowledge of Schroedinger did not extend beyond the fact that he had lived in Dublin for fifteen years, had won the Nobel prize for physics in 1933, and was a friend of Albert Einstein. Our physicist companion tried to explain Schroedinger’s theories and then said that the world as we know it arose from the work of Schroedinger and his colleagues—that the digital technology, our computers, our televisions, our phones, and so on, the things we all take for granted, had its roots in their work.

I stood and agreed with him, my Grade 1 in Certificate of Secondary Education General Science did not cover understanding the work of Nobel prize winners.

“I’m a priest”, I laughed, “I have enough trouble trying to understand the purpose of things without understanding how they work”.

“You need to look at something called the anthropic principle”, he said, “it suggests that the universe works in such a way that we are the outcome”.

I think he was saying that there is scientific thought that suggests that there is purpose in the universe, that it is not just all random and meaningless. I did look up the anthropic principle, but, without someone to explain, I’m not sure I really understood what it was saying.

I wish I had got the man’s name and address. I thought about writing to the police station in Devon and asking, but then thought they would think I was some nutcase. I think he was probably a deeply spiritual man, not necessarily religious, but someone prepared to think about big questions; someone open to the possibility of there being unimagined answers to our questions; someone prepared to accept that there are mysteries that simply cannot be explained by human science.

I wondered about the huge gap between where scientists are in their thinking and where the church is. What meaning have church doctrines in a universe that is 13.5 billion years old? Do they apply to the whole universe? What about the universes that may be beyond this one? It was too much to think about.

The church simply does not engage with people where they are; even kids in Sixth Class at national school are now asking me whether the stuff I tell them has any truth for anyone outside of the church. If we can’t talk to the world that has been shaped Schroedinger and Einstein, then we will find we gradually have fewer and fewer people left to listen.

The church still talks about medieval questions—ninety years after Countess Markievicz was elected to the first Dail, we still argue about whether women can have the same ministry as men. Five hundred years after the Reformation, the church is still arguing about who can say Jesus’ words over the bread and wine and what the bread and wine become when the words have been said.

Perhaps it wasn’t so different in the days of Jesus. The disciples are looking for Jesus and “When they found him, they said to him, ‘Everyone is searching for you.’”

Why is everyone searching for him? Why does an itinerant preacher from Galilee suddenly command so much attention? Because people have turned their back on the church of their day.

The religious leaders believed they possessed all knowledge; they had life worked out as a series of rules and regulations; they were sincere in their belief they were right; they would even execute people for breaking the rules, honestly believing this was what God wanted. But they don’t answer the questions.

‘Everyone is searching for you.’ Jesus is told because for the first time they have found someone who makes sense. But, let’s be clear, Jesus is troublesome, he doesn’t fit into the old laws: what does he go on to say he is like? Sewing a new patch onto an old garment or pouring bubbly new wine into dry and cracked old wineskins. Trying to fit Jesus into the old religion would be like trying to fit Einstein and Schroedinger into the old teaching of the church—it doesn’t work.

‘Everyone is searching for you,’ say the disciples. Searching because they believe that in this man there is an answer to their questions.