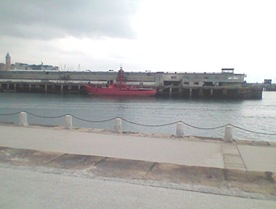 Memories of the Holyhead ferry were shared.  A man who had worked for British Rail remembered selling thousands of single tickets to destinations in Britain in a single weekend; another man recalled travelling back to Ireland just before Christmas.  The boat was packed and the atmosphere was electric; this was the only time in the year many of them would get home.

The Carlisle Pier stands as a derelict, mute reminder of those days, fifty years past.  It is redundant now as the old lightship tied up beside it.  The lightship is up for sale – the options for the pier are much more limited.  Various plans were presented in a public consultation: the public favoured strongly one plan and the authorities thanked the public for their interest, but said one of the other plans was their preferred choice.  Nothing happened; with the collapse of the property market, nothing is likely to happen.

The March wind was biting on Saturday. Sitting on a bench on the harbour wall, looking at the departure point for countless thousands of Irish people, there was a sense of frustration that the outward flow had again begun.  This time it is a fast departure by air, and the options for returning on a regular basis are much more plentiful, but the warning that the forty-somethings might be the first generation forced to leave twice is in danger of coming true.

What happened to all the money?  Why, like the Norwegians, were huge sums not salted away to tide us over the difficult times?  The social welfare fund will be exhausted sometime this summer; the pension reserve fund is being used to prop up the banks; where is the money for our old age?

The Mirror dinghies raced around in a tight circle; getting wet in such temperatures seemed an activity for only the most devoted.

Had that been what we did? Raced around in circles? Had we no money to set aside because whatever was made had to be put back into the economy to keep the spiral going upwards?  Had there been anything other than a huge bubble inflated by colossal indebtedness?

Have we all been the victims of a huge Ponzi scheme? (Or should it be a Madoff scheme, now?)  The earlier entrants to the property market being paid from the loans made by the banks to the later entrants?  Has it all been a scam?  Was there anything more than fairy gold underpinning the whole process – money from nowhere that evaporates as soon as it is realised that assets can no longer be sold for the price at which they were bought?

Time to go home and watch the rugby.  In times when nothing seems to have substance, John “The Bull” Hayes is one solid certainty.