“Galileo did not invent the telescope”.

“Of Telescopes and a Moon Landing – Two Important Anniversaries” was the first lecture at Trinity College’s “From a Bang to a Whimper: Celebrating Differing Views of the Universe”.

In this 400th anniversary year of the telescope, it seems odd to now learn that it was not invented for the lofty aspiration of exploring the heavens, but for altogether more mundane reasons. Galileo refined the telescope in such a way that he was able to observe the moons of Jupiter, but its invention was due to business, and not science.

Going to the National Gallery at lunchtime to sit and look at Johannes Vermeer’s “Woman Writing a Letter with Her Maid”, a connection between telescopes and Dutch painting suddenly seemed obvious. 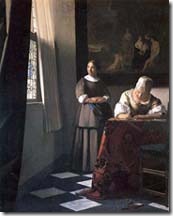 The work of Vermeer and his contemporaries became possible because of the wealth of the Dutch merchants who could pay for such paintings. The Rijksmuseum in Amsterdam tells of the importance of the emerging merchant class as patrons of the arts. In Protestant Holland, the Church, the body that had traditionally paid for art, no longer had the same influence. Art depended on business, but was also freed from the confines of the traditional religious themes. The brilliance of Vermeer could be used in exploring secular themes, but only because an entrepreneurial class had cash in their pockets. “Woman Writing a Letter with Her Maid” was never sold during Vermeer’s lifetime; after his death his wife gave it to a baker to settle bills, huge arrears having accrued.

Caught in a downward economic spiral, the Irish government has forgotten the role of self-interest as a spur to activity. Everyone likes to be rewarded, (even Christians like to be rewarded!); enterprise and work have to seem worthwhile. There must be a point where people think that perhaps something is not worth the effort. Surely that point comes when most of additional earnings are taken away by the Government. When marginal rates of tax and levies pass 50%, when the Government starts to take the majority of the reward for one’s efforts, then questions arise as to whether effort is worthwhile.

Had the Dutch authorities operated a confiscatory tax regime, one wonders whether the telescope or the Vermeers would ever have emerged in that country. A day spent on either side of Nassau Street would have been salutary for the finance minister.