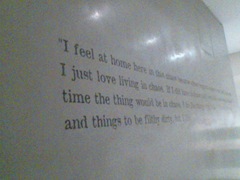 “I feel at home here in this chaos because chaos suggests images to me.”

Francis Bacon’s studio has been reconstructed in the Hugh Lane Gallery in Dublin, each inch of it an exact rebuilding of the place in which Bacon produced his work. Bacon’s idea of chaos is truly chaotic. His studio is not merely untidy, it is a confined space completely filled with mess. While some need order and tranquility in order to find creativity, Bacon found inspiration amongst confusion. 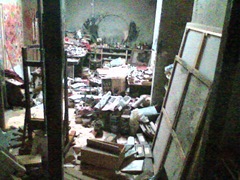 There is something Biblical about creating out of chaos. The second verse of the book Genesis says, “the earth was without form, and void; and darkness was upon the face of the deep”. The primeval chaos following the opening moments of the universe created images of an infinite variety of possibilities – the writer of Genesis sees God as a Spirit brooding over the primitive elements that would combine to produce the subsequent aeons of time and space: chaos was not something bad, but something that allowed the possibility of unimagined outcomes.

Bacon caught glimpses of possibilities in what others would see as a room filled with rubbish; images arose from combinations of items that might not have been possible in an orderly household. In a world where chaos is feared, Bacon may offer guidance.

Chaos has always been the producer of new outcomes. Karl Marx regarded revolution as the driving force of history and there are no times more chaotic than revolutionary days. The American and French Revolutions in the late 18th Century laid the foundations of liberal democracy; though it would probably have been hard at the time to imagine good coming out of violent upheaval. The World Wars in the first half of the 20th Century created a world where the values of freedom and human rights are at least espoused; though for anyone caught in the slaughter the price of preparing the way for such values was infinitely high.

It is not a seeking after chaos that is desirable, but rather, when the chaos arises, imagining outcomes that are different from the past.

The worldwide economic recession, that threatens in some places to become a full-blown depression, has nothing to commend it – there is no good unemployment and poverty (and bishops who talk about the recovery of ‘values’ should try living on social security payments for an indefinite period). Yet, Bacon-like, there is the possibility that it will suggest other images of the future, that the world economic system that evolves from the experiences of these times will fundamentally differ from that of the past. The suggestion of images, does not mean the fulfilment of those images. Bacon would glimpse things, only to be dissatisfied with what appeared on canvas which would prompt him to scrap the piece. The imaging of a new economic order commands no consensus of what shape it might take, or even if it is possible at all, but, for a time, there is at least the possibility of beauty and creativity emerging out of chaos.