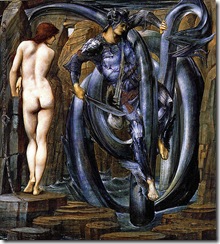 Birmingham Museum and Art Gallery has an exhibition of paintings from the Perseus Cycle by 19th Century artist Edward Burne-Jones. Never being educated in the classics, the subject of each picture would have remained a mystery if there had not been a card adjacent to each painting giving some explanation. Even then, all was not entirely clear.

The Gallery has other Burne-Jones works, including “The Star of Bethlehem”. It is a huge canvas, dominating the room in which it hangs.

It is a picture full of interest. Joseph appears to have been off collecting brushwood for lighting a fire; an axe lies beside his right foot. Mary looks sullenly, almost suspiciously, at the visitors. The baby Jesus recoils at their sight, drawing close to his mother for protection. An androgynous angel hovers, not in the sky, but a few feet from the ground, like someone who has mastered the art of levitation. Caspar has lain his crown on the ground, a mark of respect to the king he has come to visit. Melchior has a battle sword of an improbably large size, the crown in his left hand dwarfing the little jar of frankincense. Balthasar is African and looks an altogether tougher character than the wimpish Melchior or elderly Caspar.

For those in the business of narrating the life that includes that story, that is a troubling prospect. 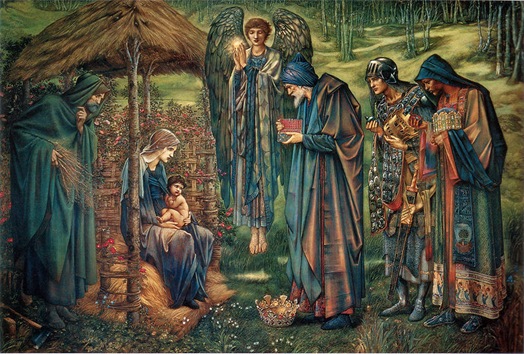