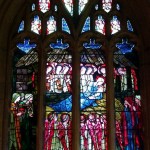 An old Jewish story came to mind in Huish Episcopi Church this evening.

A story told of Isaac the son of Jacob, a Jewish rabbi living near the Polish city of Cracow many years ago.

The captain of the guard roared with laughter, “Treasure under the bridge indeed. You silly old man, are you not old enough not to believe in dreams? I myself had a dream last week. I dreamt there was treasure buried in the house of a rabbi called Isaac the son of Jacob. What would you makeof that dream, old man?”

Travelling to Birmingham for an exhibition of the work of Edward Burne Jones, one painting’s caption advised that Burne Jones’ stained glass window of the Nativity could be seen at Huish Episcopi in Somerset. Huish Episcopi was the family’s home parish; my grandparents lie in the churchyard.

For years this artist’s work had been on the doorstep and I had never noticed. Like Isaac the son of Jacob I had missed the treasure in my own home.