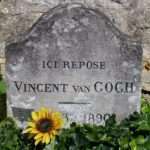 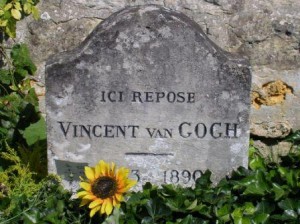 Van Gogh was one of those names learned at primary school that did not sound as a primary class usually read it; our best efforts usually sounded like the English name “Gough”, we never quite mustered Dutch gutturals. It is odd that he remained in the memory, long after kings and queens and inventors and explorers and soldiers and missionaries have faded beyond recall, this Dutch painter clings on.

Don McClean, he of “American Pie” fame, helped understanding. His song “Vincent” captured a sense of van Gogh’s colour, and a sense of his pain. “Starry, starry night” conjures oranges and yellows, but also dark blues and deep blackness.

We travelled to Auvers-sur-Oise in search of Vincent. This was classic Impressionist country, a place of light and celebration, and the village provided subjects for a series of van Gogh’s paintings. However, those who delighted in water lilies and poppies and picnics and dancers (and amply proportioned nudes), tended to shy away from the dark things. The grimness of Parisian slums, the poverty of rural peasants, these seem another world from Monet and Renoir and their friends. Perhaps the darkness of van Gogh’s suffering was also beyond the understanding of those who viewed the world with such optimism.

A century on, and it is Monet who finished his days at a ripe old age at Giverny, and van Gogh who died tragically young in Auvers, both in the countryside outside of Paris, who now command the world’s highest prices – their paintings selling for tens of millions.

Not desiring to see the room where Vincent fatally wounded himself we walked through the village and out to the fields beyond. The cemetery is now part of a van Gogh trail, but the graves of Vincent and his brother Theo seem as sad as the days on which they were buried: Vincent van Gogh 1853-1890 and beside him Theodore van Gogh 1857-1891. Perhaps no primary school teacher could ever have captured the sadness of such a life; perhaps it was the unexplained that made Vincent remain in the mind some forty years on.