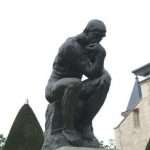 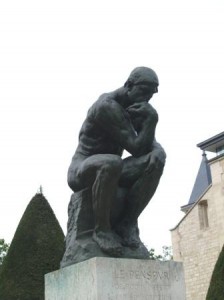 Statues were of dead people – dead rich, dead famous, or just plain dead. The rich and the famous paid for their statues, which probably explains the fine classical look of many of the subjects. Would you really depict his lordship wih three chins and a pot belly if it meant that you would never again get work from him, or from any of his friends? The striking poses and noble air pleased the person paying the bill; they hardly provided much interest or excitement to future generations, each of which felt compelled to keep up the tradition of appearing like some figure from ancient mythology or from the Roman aristocracy.

Sometimes statues were not of people who were not dead rich or dead famous, they were of the plain dead, or of the sculptor’s imagination of what the plain dead looked like. The plain dead were usually soldiers, standing aloft war memorials in villages and towns across the country, they were impassive and expressionless. Few attempts ever seem to have been made to capture the spirit of those who stare out of the old photographs; the photographers in those hellish places do Tommy Atkins a better service than any number of cold, marble carvings.

Prejudiced before even reaching the street, the Musee Rodin did not seem likely to offer a lively afternoon of entertainment. The staff were curt, “Join that line there. No! The queue to the left”, (this led to accusations of queue jumping – you can’t win). “Carry your bag in front of you!” “Use that door there!” Maybe sultry August Sunday afternoons and having to deal with hundreds and hundreds of visitors are not conducive to eirenic personalities.

Eventually, the exhibits were reached. It was astonishing that one sculptor could produce so much work; when did he sleep? Rodin seemed able to fill marble and stone and bronze with life; the figures had personality, but what did they think? What did the models think as Rodin worked at his pieces? What did the great and good make of themselves? Did the statues think the same things as the subects?

Going out into the garden, we reached his most famous piece, “The Thinker”. There must be an abundance of literature on the subject, on the high and the intellectual thoughts The Thinker might be having, but what if he was asked?

“Ha, ha. I’ve only heard that a million times”.

“What are you thinking about?”

“Being honest, I’m thinking that I’ve got a pain in the bum from sitting here all day and I’m wondering if it’s not time that you lot all went home”.

“No you didn’t, you paid to get a bit of piece and quiet; you don’t even like statues”.

“All right, but what are you really thinking about?”

“Same as you, same as most people, the ordinary, everyday things.”

“You mean stuff like, “It’s hot today. How much money have I got in my wallet? What are we having for tea? Are the family all well.”

“Yeah, not bad for a statue. Now shove off and leave me in peace.”