There was a temptation to begin this post with the words, “Helloooo! I know you’re out there! Why don’t you come into the light so we can see you?” but that would have been to behave as weirdly as the obsessive himself.

Alexa describes itself as a “web information company”, it provides in its own words, “Free web traffic metrics, top sites lists, site demographics, hot urls, and more . . .”. For those at the deep end of the web business, Alexa is about serious stuff; for those of us who splash around in the shallow waters, Alexa is fun.

Anyway, a friend, checking the rating for a prominent newspaper columnist and economics commentator, sent a link to an Alexa page for the person’s website. It was the keywords page and had a bizarre search term as sixth on the list. 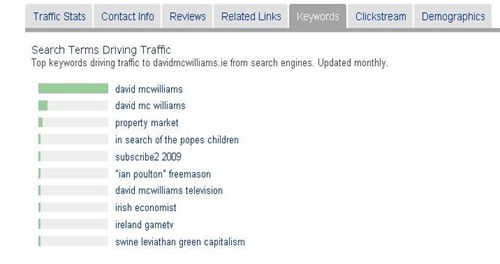 It seemed weird enough that anyone was crawling the net with “ian poulton” freemason as their search term: a straightforward Google search would have told them that “ian poulton” not freemason would have been the accurate term. What is even weirder is that this person has pursued this search so many times that it is appearing in the top ten keywords for someone else. Entering their search term into Google, some reference to some newspaper column has taken them off in their search for evidence that I am a member of a Masonic lodge.

Next time they enter “ian poulton” freemason into Google they are going to arrive here and Woopra is going to catch them and give details of their Internet Service Provider address, their location, their screen resolution, their operating system and their browser. Once caught they might decide to get a life, or at least decide to go off and check out some really esoteric stuff, there’s a lot of it out there.