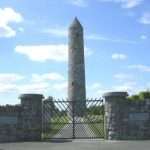 The Island of Ireland Peace Park at Messines in Belgium is a place of simplicity, a place of tranquility. A path leads to a round tower, beside the path there are inscribed standing stones and stone slabs set into the ground. Along with the memorials recording in stark terms the suffering of the three Irish Divisions, there are recorded selections of words from those present.

In the nearby town of Ypres, there is a nightly ceremony at the Menin Gate. Last Post is sounded at 8 pm, followed by the reading of Laurence Binyon’s “Ode to the Fallen” and then the Silence before the sounding of Reveille. The Menin Gate is a stone arch upon which are engraved 54,896 names of those Commonwealth soldiers who fell in the battlefields around Ypres and who have no known grave. Fifty thousand names cover a lot of space. 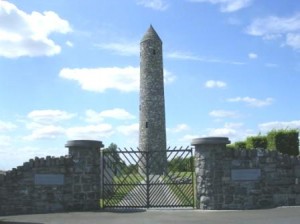