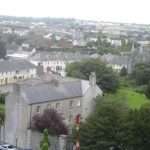 The original house was built in 1614; the present, constructed on the same site, dates from 1755. It is not huge, but big enough. A protected structure inside as well as out, it needs a bit of thought when being furnished.

When colleagues arrived after Christmas with a gift for the new house, it was intriguing to see the contents of the two boxes. Were there to be a prize for the last thing one would consider installing in an 18th century house, it would probably be up there on the rostrum.

One box contained a disco ball and the other a light with coloured filters that could be mounted on a wall to shine on the ball which, as it span, would then reflect rays of coloured light all around the room. It will be hung somewhere! It won’t recapture 1755, but it might manage 1975.

There is great fun in the absurd. The genius of Monty Python, and similar programmes, was to realize that people, well some people, delighted in the utterly incongruous; that what was sometimes not much more than schoolboy humour, worked because it was simply silliness for the sake of it.

Marking exercise books from a class of 12 year olds, they seem to understand, and delight in the absurd.

“Why did the Prodigal Son leave home?” “To join the circus”, writes one boy, “or”, he continues, “maybe it was just because he was bored”.

Perhaps the questions are platitudes and perhaps 12 year olds have a keen eye for such things. The exercise concluded with questions about how they would make the world a better place. Maybe it is not such a bad question, but it is probably one they have answered countless times, in the knowledge that their answer makes not the slightest difference.

One answer is sharp, a note of frustration, “It should not take a crisis for people to do something”. Most contain the stock responses about the environment and peace and climate change, though there is a feeling that these are being recited, just as the answer to 6 x3 might be spoken without much thought. A handful have no time for churning out lines they have been taught. “What would you do to make the world a better place?” asked the textbook, and the potential Monty Pythons, who are dotted around the classroom responded.

“Have barbecues on Wednesdays”.

Twelve year olds are hardly likely to be able to articulate thoughts on being subversive, but it is probably those who gave the absurd answers, answers that might appear in some student rag magazine, who will go on to ask the most searching questions. It was George Bernard Shaw, that troublesome Dubliner from former times who is quoted as saying, “Reasonable people adapt themselves to the world. Unreasonable people attempt to adapt the world to themselves. All progress, therefore, depends on unreasonable people.”

Being absurd brings with it a sense of identity, of freedom, of individuality, of challenging convention and established thinking. Absurdity can include a disco ball in the deanery.