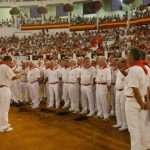 “The band from Dax begins to play”, said the BBC commentator as France ground their way to a victory over England and to a Grand Slam triumph in the Six Nations.

Were they from Dax? It didn’t matter. They had the sound of the bands from countless occasions in that corner of France; a place where rugby and bull fighting compete for popular attention, and where both are followed with a passion that is incomprehensible to outsiders.

The bull ring in Dax is packed for the feria each August; thousands of people dressed in white with red neckerchiefs, along with choirs and bands. It always seems sad to a sentimental Englishman that such a vibrant occasion is marred by the killing of animals.

A British visitor said he had been with friends one evening out of curiosity. He had been lucky to get a ticket, but had been mystified that it was considerably cheaper than those of his friends. Reaching the ring, he discovered that while they were in the shade; he caught the full force of the late afternoon sun, leaving him as red as the neckerchiefs the next morning. “The last time I go to a bullfight”, he muttered.

Sud Ouest, the regional daily, carries reports on the fights each morning. There seems a complicated scoring system that runs from silence to applause, to one ear, two ears and a tail. Was there some league table or some championship for bullfighters? How many ears is a tail worth? It seems a sport for initiates. The newspaper was less than impressed one evening last summer. The front page carried a picture of a bull standing alone and defiant in the ring with the headline, “Un toro et c’est tout.”

What seemed strange in looking at the pictures in the newspaper, and those on sale outside a photographer’s shop in the street in Dax, was that the ring seemed a place for all the family; the crowd seemed to comprise thousands of people of all ages. Perhaps they grow up with a less sensitive dispositiion than their peers in Northern Europe.

Family attendance at the feria is matched by family attendance at the rugby matches; the neckerchiefs marking support for the club. Biarritz Olympique have even incorporated a red neckerchief design into their rugby shirt for the current season; though their supporters seem a reserved and quiet group compared to the pale blue neckerchief wearing followers of neighbouring Bayonne. Whole families can be found at the matches; granted, some may not be wholly engaged with the events on the pitch, but it is nevertheless an event for the whole community.

But why rugby and bullfighting? Why have those sports the power to bind together whole communities in a way that might be rivalled by Gaelic sports in Ireland, but which simply does not happen in Britain? The band from Dax, or wherever, was playing, but what brought them up the long road to Paris? What was it about rugby that evoked such passion?