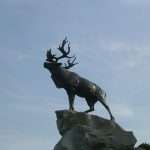 A warm and gracious guide from Prince Edward Island took us round the Newfoundland Memorial Park.  It was hard to imagine the boys from tiny communities setting off across the Atlantic to meet the reality of Europe at war; sailing in the expectation they would probably never return.  Their losses were devastating and there were communities that never recovered.

Their eastward journey was the return of the westward journey made by settlers years, decades, even centuries before.  The dangers were not so great, but for those making the journey, it probably seemed as forbidding.

I once preached a 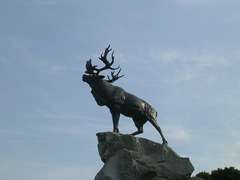 t the Anglican church in a small lumber and mill town about an hour outside of Vancouver. It was not remote at all by Canadian standards, more like a suburb. But to us it was a very long way from anywhere. The next parish one way was in Vancouver, the next parish the other way was a long way away. It had a beautiful new church building with a fine set of church halls and offices.

The rector  had just been appointed to another parish, so the parishioners were in the process of organizing a congregational meeting with the Archdeacon to discuss their hopes for a new incumbent. One of the ladies asked me in passing, “You are not interested are you?”

I smiled and walked on. I didn’t like to say that to me this town felt very far from anywhere and that I was missing BBC radio so much that I had thought of buying a short wave radio to try to listen to the World Service in the hope of hearing news that was not about the United States.

We travelled on from that place and I thought about the first Europeans who had come to settle in these wide and rugged places. The whole of Canada was once covered by the territories of the native peoples, but they were mainly hunter gatherers and they moved from place to place according to the season and the food supply. The native people were subjected to the most appalling treatment by the authorities; and for the ordinary settler the country must have seemed the most hostile of places: a harsh environment with savage winters and local people who were not pleased to see you.

The settlers were follo 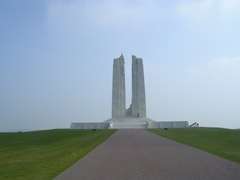 wed by the churches. Intrepid clergy naively unaware of what dangers lay in wait for them, headed out into the vastness. To make the westward journey from these shores in those times could often mean never seeing home or family again. The churches made many mistakes and got some things seriously wrong, but no-one could doubt the sincerity of those who left everything behind to go out to share what they believed. It took considerable faith to head out into the unknown.

What did those who left the old world to make their lives in the new world make of their sons being pulled back into the mud and hell of Europe? Perhaps the Newfoundland Memorial and the Vimy Memorial and the Saint Julien Memorial speak eloquently of the pain of warm and gracious people.