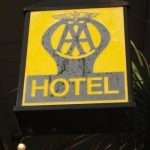 The death of restaurant critic Egon Ronay creates a strange sense of loss.  It’s not that eating in Ronay listed restaurants was ever affordable on a clerical stipend, more that Egon Ronay seemed representative of a secure and stable world.  His name seemed to go with the good things of middle England; fine establishments on the High Street or hidden gems in the shires.  They were the places that appeared in the pages of the Daily Telegraph and the Sunday supplements.  Egon Ronay’s name conjured up visions of good taste and discerning clients.  He was one of those national institutions that reassure you that all is well with the world.

It is odd that having never knowingly eaten in a restaurant recommended by the guide, that its founder would find a place in the consciousness.  Perhaps it is a name rooted in childhood memory; his guide began in 1956.  Perhaps he goes with all those things that one associated with stability and safety.  Of course, the world of the 1960s was probably a considerably more dangerous place than the world five decades later, it’s just that there were not 24 hour rolling news channels bringing coverage from every corner of the world.

Egon Ronay’s name seems to go with symbols of security; those things you never noticed until they were no longer there.

Visiting Beaumaris in North Wales during April, a hotel had at its door an illuminated AA sign, the like of which probably disappeared from most places at least twenty or thirty years ago. It conjured up visions of a bygone age – Morris Minors and roly-poly Rovers and Austin Cambridges.  It brought memories of tea from flasks with cork stoppers and cold sausages and slabs of fruit cake.  AA signs hung above doorways the doorways of fine establishments in county towns; they went with politeness and old worldliness and a genteel world that was probably a remnant of an age long gone.

It’s odd what things from childhood, things probably not worthy of a second’s attention at the time can resurface with a quality of melancholy, as if their passing marked something being forever lost.

Making a mental list of what might be added to Egon Ronay and AA signs, there were many things that never seemed to matter.  Time seems to rewrite the lines.