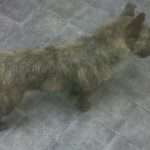 “There is a terrier running round and round in circles and barking in the front garden”.

Alberto Contador was trying to escape the attentions of Andy Schleck in a Pyrenean stage of the Tour de France and the interruption was not welcome.

“It must belong to someone.  It will find its way home”.

Three hours later.  “There is a little brown terrier running round a tree in the cathedral graveyard barking at the tree”.

It was not hard to guess why.  A black and white stray cat that lives in the close sat on a limb of the tree looking contemptuously down at the terrier, which was making repeated runs at the trunk – getting no more than eighteen inches off the ground.

“Get a lead.  We’ll move the dog away from the tree; the cat will come down and escape; and the dog will go home”.

“Let’s leave it.  It will go eventually”. 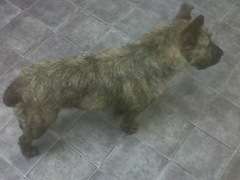 Another three hours later.  The cat has gone.  The dog has taken shelter in the cathedral porch, at a danger of being anthropomorphic, it looks very sad and very lonely.  It follows us as we walk along and comes home with us.  What are we to do?  We already have two dogs.

The final scene of a 1990 BBC television drama comes to mind: a quarter of a million refugees stand on the Moroccan coast looking at Gibraltar.  The European Commissioner handling the situation is an Irishwoman; the Irish are ‘good guys’ in world politics, an Irish commissioner would surely make the right decisions.

Faced with a sea of refugees, she refuses to allow them to cross into Spain.  The leader of the refugees offers that the Africans will come and be pets for European families; the commissioner is advised that the annual expenditure on pets in Europe is larger than the annual income of many Africans.

It was, and remains, a profoundly moving drama. As rich countries ponder their successive financial crises, and governments protest that there is no money to help poor people in their own countries, (despite finding billions for bankers), the people who will disappear from the picture are the poorest of all, those who would have a better quality of life if they came to Europe to live as pets.

None of which answers the question of what to do with the dog.  Any offers?