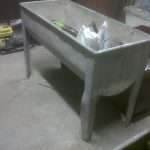 Wandering around an auction room at a preview of a sale, there were odd things to go under the hammer. Anyone into esoterica would find a collection of Masonic books and regalia. There were miscellaneous transistor radios, vinyl records, workmen’s tools and horse racing prints; dinner services, crockery, earthenware jars, rugs and mirrors. The accumulation of assorted furniture might even have included the odd antique amongst items of less exalted pedigree. Nothing, though, captured the imagination like an aluminium bath on legs that stood amongst the lawn mowers, air compressors and generators. 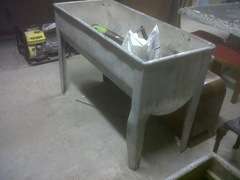 It hovered at the edge of memory, one of those things that are there, but won’t come into full focus. Where had the aluminium bath appeared before?

Maybe in the dairy of a local farm? Had it been used for washing the equipment at the end of milking? Where else would an aluminium bath have found a place? It would hardly have been a feeding trough.

If it was the the dairy, it would go with memories of safety and security, memories of long summer days, and the laughter of cousins.

Breakfast at the farm was cereal was immersed in milk scooped, still warm, from the top of the churn. A number of Jersey cows added to the richness of the milk from the Friesians, and along with the warm fresh milk, there would have been a pink Tupperware bowl, from which to spoon cream over the top of the plentiful sugar that had already been sprinkled on the corn flakes.

Breakfast seemed always to come at the start of days that were always sunny and that were filled with activity. Breakfast at the farm was during the summer holidays, the month of August; it was harvest time when every hand was needed to bring in the crops. Family from distant places would gather and the work was imbued with a holiday atmosphere.

Evening milking had a mellowness about it. Fetching the herd in from lush grass fields; the sound of feet crossing the concrete yard; the clink of the chains as the cows went into their stalls. The stalls smelt warm and sweet; the cattle placid and at ease.

Where will the bath go at the auction? Does anyone have a use for such things anymore? Will it end up as a flower bed, or some other unintended use? How did it end up in an auction room in the first place?

Why don’t things like aluminium baths come with a provenance in the way that paintings and 18th Century tables do?