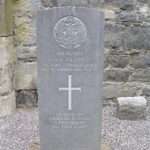 Having toured the Somme and Flanders in the spring, the gravestone looked unmistakably familiar, except that it stood alone. Instead of being flanked by hundreds, or even thousands, of fallen comrades, 2313 Private J. I. Allen, of the 2nd Battalion, King Edward’s Horse, lies alone. “Does anyone come to the grave?” I asked the man looking after the church.

“I have never seen anyone”, he answered.

It seemed odd that in a corner of a churchyard in Kilkenny, one of the fallen should lie, apparently forgotten. No flowers, no poppy cross, nothing to suggest that anyone ever came here to play the Last Post and to recite the words of Binyon. 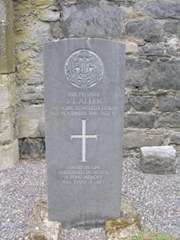 Allen is not alone, the CWGC details of Saint John’s Churchyard in Kilkenny show that there are four Commonwealth war dead buried there. How did they come to be here? Were they killed during the War of Independence?

Searching through the cemetery reports, it emerged that the other three dead were:

Second Lieutenant Leslie Arthur Hyde of the Royal Horse Artillery, who died on 26th October 1915, aged 19. Hyde cannot have been a casualty of the War of Independence, he died the year before the Easter Rising.

Googling Leslie Arthur Hyde shows him to be a Canadian,

He was a student when he enlisted with the Canadian Expeditionary Force on March 29, 1915 but was serving in the B Reserve Brigade, Royal Horse Artillery when he died on service on October 26th, 1915 at the age of 19.

But there is no explanation as to how he came to be buried in Kilkenny. A similar search for Private John Irwin Allen produced no results.

Someone must know the story of the Saint John’s war graves; it would be good to hear.