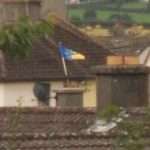 It’s like sailing into the Royal Naval dockyard in Portsmouth and hoisting the skull and crossbones.  Deep in the middle of Kilkenny city, in the midst of a sea of black and amber flags, banners and bunting, a solitary blue and yellow flag flies from the chimney pot of a house; the colours of Kilkenny’s opponents in the All Ireland hurling final on Sunday, 5th September, the colours of Tipperary.  It is a mark of the extent to which Gaelic sports are embedded in the lives of communities that a new arrival like myself should notice a clash of the colours.

e GAA provides communities with identity, but, in times when Irish Catholicism has been in apparent freefall, it may also be a major factor in the future of the church.  The “Gaelic Athletic Association for the Preservation and Cultivation of National Pastimes” was founded in 1884, a strongly nationalist and anti-colonial organisation.  Michael Cronin discerns the decision by the Gaelic Athletic Association to adopt the Catholic parish as the basic unit of its structure as a key to its success, in his book Sport and Nationalism in Ireland: Gaelic Games, Soccer and Identity Since 1884 Cronin says,

Whereas other sports in Ireland arranged themselves around schools and colleges, were based in factories and other places of employment, or emerged on an ad hoc basis, the GAA chose the parish as its template for organisation. The thinking behind the decision was simple but would have a profound and important effect on the GAA. By choosing the parish as its structure, the Association openly allied itself with the Catholic Church, the single most important and powerful body at the time.

The GAA is best known to those of us who did not grow up in a rural Irish parish for the Gaelic football and the hurling played under its auspices, but it was established also to promote Irish culture through music, dance and the Irish language. It is an organisation with a strongly national identity, having some 800,000 members (a figure equivalent to 20% of the population of the Republic of Ireland). Because of its parish structure it has a strong Catholic ethos. At its outset, in the late 19th century, the GAA benefited strongly from its alliance with the Catholic Church, in the current times, when the church is on the defensive, the church benefits from its alliance with a vibrant sporting, cultural and social organisation.

The noteworthiness of a blue and yellow flag in the wrong county derives from the strength of county identities, which are built on the strength of the parishes within them.  While the parish clubs remain strong, the church retains a grassroots base on which to build for the future.