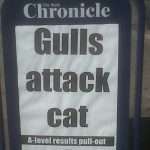 Holidaying in the Channel Islands in 1997, the evening news was enlightening. Having flown from Belfast, where the process of members of the opposing communities agreeing not to kill each other was proceeding at snail-like pace, the Channel Islands’ local news headline that someone had been threatened with a knife outside of a nightclub was strangely reassuring. Not that someone had been killed, or injured or attacked; the fact that someone had been threatened merited inclusion at the top of a bulletin. Imagine living in a community so safe that the mere threat of violence is enough to inspire news coverage. 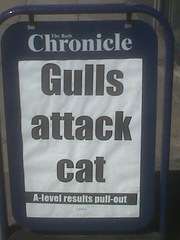 Walking through the beautiful streets of the city of Bath on Monday morning, where parking on streets within ten minutes walk of the city centre was free on account of it being a bank holiday (imagine such a thing being contemplated in Dublin, there would have to be a cut in councillors’ expenses), a newspaper board caught the eye. So convinced were we that the headline was a misprint that we searched around for another news board before being convinced that the top news story was about seagulls attacking a cat.

What a wonderful place to live. Bath and North East Somerset unitary authority has a population of 180,000 – considerably larger than Cork or Limerick – and the lead story of the local newspaper is an incident that might barely merit mention in most places.

Unfortunately, both shops were closed, so it was not possible to buy a paper to discover what other issues were concerning the citizens of what must be one of the most picturesque cities in the world.

Perhaps the headline is in the tradition of the alleged 1912 headline, attributed in various forms to various newspapers, but never actually printed anywhere, ‘Titanic sinks: Local man feared dead’, in its emphasis on the local and the particular, or perhaps it is a reflection of a community at peace with itself.

To live in a community where discord in the animal kingdom is worthy of report is like living in some Elysian vision, far removed from drug dealers, graffiti, and teenaged boys drunk on cheap lager; far removed from corruption and ghost estates, and those who have made millions walking away from the problems they have caused.

Perhaps the sheer price of housing in the city makes the community self-selecting, though that did not inhibit graffiti and crime in south Dublin, or perhaps Bath has a secret they should share with others.