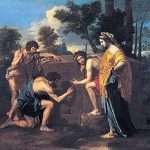 A call came during the week asking about the readings for today.

“The lesson is from Haggai.  You know the passage, ‘Who is there left who remember this house in its former glory?’ Don’t Freemasons remember the building of the Temple?”

Laughter from the caller, “After the exile, we rebuilt the Temple”.

A moment’s temptation to suggest those responsible for reconstructing the Temple in Jerusalem in the Sixth Century BC had little connection with a middle class men’s club, but why be so hard headed, don’t many people have stories by which they live?  Even families have their own myths; stories of land or money lost by forebears, stories of heroism and travel and associations with famous people; maybe they don’t even believe the tales themselves, but there seems a need to be felt special.

Knowledge of special secrets seem part of that human need for significance; if one possesses a particular knowledge, it sets one apart from those around.  Those who would debunk the stories would be no more welcome than a suggestion to a Masonic Lodge member that their traditions were lacking in historical veracity.

Harry Eyres’ column in the weekend edition of the ‘Financial Times’ is an exercise in debunking.  Contemplating Poussin’s painting, ‘A dance to the music of time,’ which has been subject to esoteric interpretations  Eyres writes,

So what is the point? It is that there is nothing in the least esoteric about this painting, no hidden secret. It is simply one of the most poignant, poised, comprehensive visions of human life – what it is to be a human, living in time – that has ever been committed to canvas.

(Perhaps some member of a secret society has taken exception to Eyres’ words; the painting shown in the paper edition of the FT is not Pouusin’s ‘A dance to the music of time,’ but ‘Et in arcadia ego’ by the same artist). 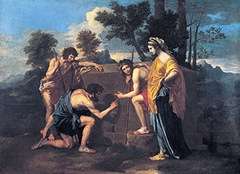 Those who think Poussin has hidden meanings will no more be dissuaded from their belief in the esoteric, than would many Freemasons accept that their stories are no more than stories.

Eyres shares a common ground with novelist and philosopher Umberto Eco whose monumental work ‘Foucault’s Pendulum’ satirically surveys the so-called secret societies and the occult; Casaubon, one of the central characters comes to a conclusion that would strangely find acceptance amongst orthodox Christians.  Eco’s words suggest that Jesus would have felt much in common with Harry Eyres in preferring the simple to the esoteric:

“Yet someone had just arrived and declared himself the Son of God, the Son of God made flesh, to redeem the sins of the world. Was that a run-of-the-mill mystery? And promised salvation to all: you only had to love your neighbour. Was that a trivial secret? And he bequeathed the idea that whoever uttered the right words at the right time could turn a chunk of bread and a half-glass of wine into the body and blood of the Son of God, and be nourished by it. Was that a paltry riddle? And then he led the Church fathers to ponder and proclaim that God was One and Triune and that the Spirit proceeded from the Father and the Son but that the Son did not proceed from the Father and the Spirit. Was that some easy formula for hylics? And yet they, who now had salvation within their grasp-do-it-yourself salvation- turned deaf ears. Is that all there is to it? How trite. And they kept on scouring the Mediterranean in their boats, looking for a lost knowledge, of which those thirty-denarii dogmas were but the superficial veil, the parable for the poor in spirit, the allusive hieroglyph, the wink of the eye at the pneumatics. The mystery of the Trinity? Too simple: there had to be more to it.

But everything is not a bigger secret. There are no “bigger secrets,” because the moment a secret is revealed, it seems little”.

Someone-Rubinstein, maybe-once said, when asked if he believed in God: “Oh, no, I believe … in something much bigger”. And someone else -was it Chesterton?-said that when men stop believing in God, it isn’t that they then believe in nothing: they believe in everything.

No rebuilding the Temple; no secrets; no mysteries.