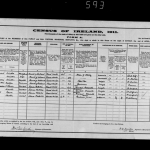 The house is freezing these winter nights and even reaching out to check the alarm clock was cold. Imagine having been one of the staff who had lived in the basement rooms a century ago. When there was still the opportunity for another hour’s sleep, thoughts turned instead to which rooms had been home to those who had kept the house going.

In the 1911 Census, eight people lived in the house: 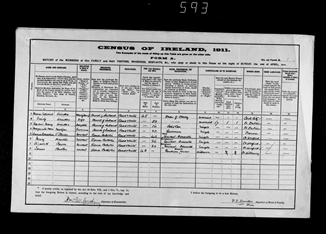 Did it take a staff of five to look after three grown people in 1911? If that were not enough, the coach house in the front yard was occupied by the Rickaby family. Thirty two year old George Rickaby is chauffeur to the family; he and his wife Teresa lived in the coach house with their daughters, one year old Norah and Kathleen who was less than a month old.

Just five years before the week of Easter 1916 which would change things utterly, life here seems to have been lived as though it were still the Nineteenth, or even the Eighteenth, Century. Ten years previously, seventy year old Dean Hare and his two adopted daughters had employed only two servants.

1911 was the eve of the modern age; society was changing; communications and transport were being revolutionized; nationalism was dominant in Ireland and Home Rule on the agenda; three years later, the Great War would change the world. What would the staff have thought about getting up at six, or earlier, on a morning such as today’s in order to light fires and prepare hot water for the dean, his wife and his daughter? Might they not, at least, have wondered what any of this had to do with the son of a carpenter from Nazareth?

If the Grey Lady really did wander the close, then who of those who have worked in this house through the centuries would tread the stairs at dead of night?