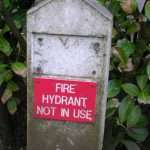 A Winnie the Pooh moment when walking through the castle grounds in Kilkenny.

A sign declaring what something was not. A concrete marker that one would associate with fire hydrants with a permanent sign affixed to it, ‘Fire hydrant not in use’. Would the simpler course of action not have been to have removed the marker? Perhaps the desire was to emphasize the negative, like the time when Pooh called at Piglet’s house and Piglet was out and ‘The more he looked inside the more Piglet wasn’t there’.

Or perhaps it was a piece of improvisation, as in the case of Eeyore’s birthday? Making use of something that otherwise would be useless?

Eeyore’s birthday did not turn out as it might have done. Pooh sets out with a jar of honey, but eats the contents on the way, leaving only an empty jar to give to Eeyore. Piglet runs along with a big red balloon for Eeyore, but falls on the way, bursting the balloon, and has only a piece of damp rag to give Eeyore.

“Thank you, Piglet,” said Eeyore. “You don’t mind my asking,” he went on, “but what colour was this balloon when it — when it was a balloon?”

“I just wondered. … Red,” he murmured to himself. “My favourite colour. … How big was it?” 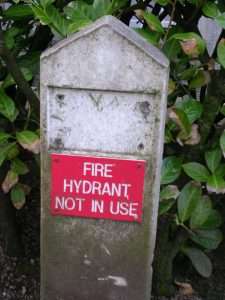 “I just wondered. … About as big as Piglet,” he said to himself sadly. “My favourite size. Well, well.”

A burst balloon and an empty jar have hardly the makings of a happy birthday, but Eeyore suddenly demonstrates an extraordinary capacity for making the best of his circumstances.

“It’s a Useful Pot,” said Pooh. “Here it is. And it’s got ‘A Very Happy Birthday with love from Pooh’ written on it. That’s what all that writing is. And it’s for putting things in. There!”

When Eeyore saw the pot, he became quite excited.

“Why!” he said. “I believe my Balloon will just go into that Pot!”

“Oh, no, Eeyore,” said Pooh. “Balloons are much too big to go into Pots. What you do with a balloon is, you hold the balloon ”

“Not mine,” said Eeyore proudly. “Look, Piglet!” And as Piglet looked sorrowfully round, Eeyore picked the balloon up with his teeth, and placed it carefully in the pot; picked it out and put it on the ground; and then picked it up again and put it carefully back.

“Doesn’t it?” said Eeyore. “It goes in and out like anything.”

“I’m very glad,” said Pooh happily, “that I thought of giving you a Useful Pot to put things in.”

“I’m very glad,” said Piglet happily, “that I thought of giving you something to put in a Useful Pot.”

But Eeyore wasn’t listening. He was taking the balloon out, and putting it back again, as happy as could be….

Or perhaps it wasn’t a Pooh moment at all, perhaps it was just a piece if frugality, a waiting for a time when it might be useful?

A friend with memories of Ireland in the Fifties describes how the Eeyore spirit, of improvise and make do, was not such a bad way to be. He tells of sorting through the house of a maiden aunt who had died and finding a jar labelled, “Pieces of string too small to be of any use”. The jar was filled with very short lengths of string.

“What was she going to do with them?”

“Who knows”, he said, “but you never knew when you might need a short piece of string!” Indeed, and who knows when a concrete fire hydrant marker, slightly worn and missing original sign, might be needed?