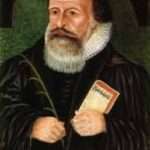 The performance of the Irish rugby team in the opening match of the World Cup was less than impressive, one of those moments when you shout at them that they know they can do better; not that they could hear when they are in New Zealand and you are driving a car in Co Offaly. But did it really make any difference? Did it really matter? I arrived at church and got on with the day’s business. In the great universal scheme of things, does it make the slightest difference whether they make the semi finals or not? Will it make any difference to the serious business of the world? No.

We get so worked up about things that are of no real consequence. The news is full of stuff that is completely and utterly insignificant. Stories of ‘Celebrity Big Brother’ and who is appearing on ‘The X Factor’; these things are not of real importance; none of it matters.

Maybe in order to survive, in our house, we have had to become a hard-hearted lot, we have an unofficial rule that tears are only allowed in the event of something serious happening. Has there been an accident, is someone seriously ill, or has someone died? Other stuff is trivial; it might be upsetting, but it can be managed.

I wonder how it would have been possible to cope in the situation faced by Martin Rinkart, the writer of ‘Now thank we all our God’?

Born in Germany in Leipzig in 23rd April 1586, Rinkart was the son of a coppersmith from Saxony. He went to school in at Eilenburg, and when he was 15 went off to take up a scholarship at the University of Leipzig, where he enrolled in the summer of 1602 as a theology student. Staying on in Leipzig after his studies, he applied for a post as a pastor back in his home town of Eilenburg in 1610. His application was turned down, it being claimed that he was a better musician than theologian. There were personal factors in his rejection, not least the fear of the superintendent of the church that Rinkart, a native of the town, and able and strong-willed, would be a formidable colleague.

His appointment came on the eve of a terrible conflict that began in 1618 and became referred to, in retrospect, as the Thirty Years War. The war was beyond the understanding of most ordinary people, all they knew was that army after army laid the countryside bare, having no regard for the welfare of civilian populations. Famine and disease became widespread; farms, livestock and crops had been destroyed and weak and hungry people had no resistance against illness. The war was to reduce the male population of Germany by almost half, in total almost a third of the people in the German states lost their lives, mostly through hunger and illness.

By 1636, Martin Rinkart was the only pastor left in Eilenburg. The walled city had become a place filled with refugees, who brought with them further infection to add to that already present, and who placed further strain upon the town’s desperately short food supplies.

The refugees brought plague with them and in 1637 8,000 people in the town were to die from it. The illness had no regard for wealth or age, the town councillors and many of the town’s children were among the victims. There had been four pastors in the town, one left to find a safer place, and Rinkart buried the other two. In May 1837, he buried his own wife. He was to bury more than 4,000 people during the plague, which was followed by a severe famine that saw people fighting in the street over a dead crow or cat. He was faced with conducting up to fifty funerals a day as the town struggled to cope with a huge mortality rate, by the end of the year the bodies of refugees were bein buried in trenches with no service.

The plight of his people and the constant danger to his own life as he tried to minister to the sick would have left most people with little sense of a bounteous God who blesses his people, but Rinkart read the following verses in his Bible, from the book of Ecclesiasticus, Chapter 50, verse 22-24:

And now bless the God of all,
who everywhere works great wonders,
who fosters our growth from birth,
and deals with us according to his mercy.
May he give us gladness of heart,
and may there be peace in our days
in Israel, as in the days of old.
May he entrust to us his mercy,
and may he deliver us in our days!

Inspired by the words of Scripture, Rinkart wrote, in his native German, ‘Nun danket alle Gott.’ To be in Eilenburg in 1636 and to be able to say that God has blessed us, ‘With countless gifts of love, and still is ours today’, demanded great courage. The harsh reality of Martin Rinkart’s situation is hardly even hinted at, he asks that God will, ‘keep us in His grace, and guide us when perplexed; And free us from all ills, in this world and the next’.

If the words were hard enough to write in 1636, they would have been even more difficult in 1637, after the outbreak of plague and the ensuing famine. Yet Rinkart’s faith never wavers. The Swedish army that controlled the town in 1637 demanded payment from the town of 30,000 florins—a huge sum of money. Rinkart led a group of citizens from the town who went out to plead for leniency with the Swedish general. Their request was refused and Rinkart turned to his companions and said, “Come, my children, we can find no hearing, no mercy with men, let us take refuge with God.” An account of the event tells of how. ‘He fell on his knees, and prayed with such touching earnestness that the Swedish general relented, and lowered his demand at last to 2,000 florins’.

Rinkart lived to see the coming of better times. The signing of the Peace of Westphalia in 1648 brought an end to the three decades of suffering and misery for the people of the continent of Europe. He died in his home town, where he had ministered so faithfully, on 8th December 1649 at the age of 63—a ripe old age in the 17th Century, at a time when mere existence had been a struggle.

Perhaps we don’t know what our faith means to us until we face the worst. Until we watch someone we love very ill, or we lose them altogether, perhaps we don’t know how important it is to have someone there who will make sense of it all. Rinkart looks to a God who will guide us when we are perplexed now and who will gather us to him in the next world.

Only when I read about Rinkart’s life some years ago, did I realize what a profound statement of faith were the words of ‘Now thank we all our God’. It is a hymn about seeing life in the right perspective, being thankful for all the good things and leaning on God’s grace to get us through the bad things. It is a hymn acknowledging the God who is with us through the sad and the painful and the bitter moments, as well as the God who is there to give us joyful hearts and blessed peace. 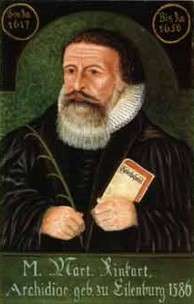