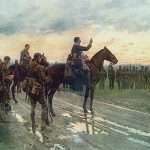 Walking out of the hospital door and turning for the car park, a voice called out, ‘Father, Father, have you a minute?’ Turning towards the voice, a man in his 30s stood with a woman of a similar age, an older man, and a boy of maybe six or seven years of age. ‘Father, my son was attacked by a dog, would you give him a blessing?’

The boy looked frightened, a line of stitches ran over the top of his head, visible through his short hair; the attack had been serious. The English rationalist in me wanted to suggest that the boy had been through a bad experience and they should be hurrying home, but they stood and stared earnestly. ‘I’m Church of Ireland’, I said, wanting to make it clear that I would probably not have the form of words for which they were searching.

‘That’s all right’, the man replied,’ ‘we just wanted a blessing’.

I crouched down and said the words of the standard Anglican blessing and, assuming they would want some outward gesture, traced the sign of the cross on the boy’s forehead. He looked pale and tired.

The man and then the woman and then the older man, who was the grandfather, each stepped forward and shook hands. To an onlooker the moment must have looked very odd, yet the sincerity of their response made it clear that the moment had been important for them.

In a discussion of yesterday of remembrance, my colleague in Abbeyleix, Co Laois had talked of the poignancy of a painting of a moment on the Western Front when a priest on horseback had given an absolution to soldiers about to go into battle. This evening he sent a link to the painting; the notes with it say:

On Saturday evening the 8th May 1915, prior to the battle in the Aubers Ridge area, the 2nd Battalion Royal Munster Fusiliers marched through Rue du Bois, about one mile out from the town of Neuve Chapelle in Belgium. The Battalion halted near a wayside shrine. Moving off the road they formed up in their respective Companies, ‘A’, ‘B’, ‘C’ and ‘D’. In front of each Company was a green flag with the Irish Harp and word “Munster” embroidered on it.

Father Francis Gleeson on horseback, facing ‘A’ Company troops and wearing his stole, administered to them a ‘General Absolution’.

The scene was captured by the famous war illustrator Fortunina Matania, who came from Naples.

What went on in the minds of the Munstermen standing there on that May Saturday? Was the blessing sought for them or something they sought? The cynic in me would yesterday have argued that they stood there under orders; after this afternoon’s experience, perhaps they stood with heads bowed of their own volition. 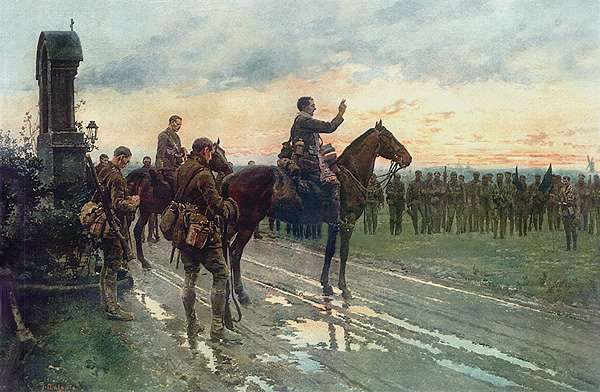