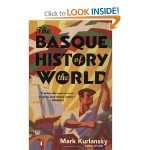 There was a Michael Caine moment reading Mark Kurlansky’s ‘The Basque History of the World’. There was a temptation to exclaim aloud, ‘Not a lot of people know that’. Or maybe it was just something I never knew.

The world featured in the book is not the globe, but the Basque land, the provinces of northern Spain and south-west France where there is indubitably a sense of a distinct identity. Kurlansky writes,

‘A central concept in Basque identity is belonging, not only to the Basque people but to a house, known in the Basque language as etxea. Etxea or echea is one of the most common roots of Basque surnames. Etxeberria means “new house”, Etxazarra means “old house”, Etxaguren is “the far side of the house”, Etxarren means “stone house”. There are dozens of these last names referring to ancestral rural houses. The name Javier comes from Xavier or Xabier, short for Etxaberria’.

‘Javier means new house’, I commented to the best beloved who was unruffled by the non sequitir.

‘Javier – it’s a Basque name. It comes from etxeberria. It means new house’.

‘Of course it is’, she commented, ‘we went to Loyola one year. Weren’t Ignatius and his followers Basques? Francis Xavier was one of them’.

The conversation prompted a resort to Google. Xavier was not a second Christian name, it was the name of the castle in Navarre in which Francis had been born – the family homes was simply called ‘new house’. All those ‘Javiers’ and ‘Xaviers’, and those whose names were contractions thereof, owed their name to a medieval building in rural Spain; surely enough to elicit comment from Mr Caine?

Years of assumptions are sometimes swept aside in a moment. Having always thought that ‘Xavier’ was some allusion to ‘saviour’ (probably arising from the Irish pronunciation of it as Zavier), the etxeberria source came as a surprise.

Such unexpected moments can bring unanticipated illumination. Attending a dinner one evening, I met a Roman Catholic priest who was an Irish speaker.

‘It does, but in Irish there are two names for ‘John’, Sean and Eoin. Ian is the Scottish Gaelic version of Eoin – it’s the name of John the Apostle, the beloved disciple’.

Regarding his comment with a degree of scepticism, I discovered it was true, that ‘Eoin’ was the Irish form of the Biblical name ‘John’ and that ‘Sean’ was the Gaelicisation of the French ‘Jean’.

A special name! Not a lot of people know that – though it’s not as interesting as being called Etxeberria. 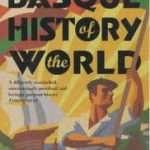