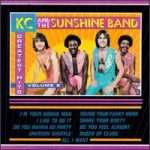 “In every nightclub across the nation, sheee-eee-eees the queen of clubs”.

The sound of KC and the Sunshine Band filled the car, conjuring a moment of angst, a feeling that being an outsider was permanent.

It was a song that told a teenager susceptible to almost any suggestion that there was an ‘in crowd’ and that if you were not part of the group, then you were a nobody.

The queen of clubs was the sort of person who authenticated experiences: ‘If you throw a party and she ain’t there, people let me tell you that your party’s nowhere’. The lyrics set forth in plain terms a sense that someone growing up in the sticks, who was always unfashionably dressed, and who wouldn’t have been near a club in his life, that real experiences belonged to a small elite.

Of course, it was all nonsense. The queen of clubs, dressed in the height of 1970s fashion, would have passed unnoticed by the rich city bankers and brokers, who would rarely have ventured near anything that was not exclusive, particularly a club where people might gain admission not by invitation, but by paying cash at the door.

The queen of clubs would have been alien to the academic elites gathered around dining room tables in comfortable suburban homes, discussing philosophy and the affairs of state over carefully chosen bottles of claret.

The queen of clubs would have been unrecognized by the ecclesiastical elites, still holding on to their fine residences and their ancient status and privileges, whose preoccupations with church politics and liturgical customs permitted neither space nor time for such worldliness as considering what might be fashionable at nightclubs.

The queen of clubs would never have been encountered by the owners of landed estates, whose social life would more likely have been expressed by gatherings of similar people at the castle that was the family seat for generations, who only ventured to ‘town’ for specific purposes.

Group after group might be identified, for which the idea that someone from a nightclub might be needed to make their gathering worthwhile would be nonsensical. The reign of the queen of clubs extended no further than the small group of people who might think that such a person was important to their experience.

There are no ‘in crowds’, rather a great multiplicity of groups, each of which faces the danger that it may come to regard itself as possessing qualities that are important to those who do not belong to the group.

The reign of the queen of clubs was a teenage illusion, that if one did not belong to the sort of group that such a person might patronise, then one was missing out on something important. It was nonsense then, and is still a nonsense. Being yourself is obviously more authentic than pretending to be something different. If the queen of clubs is not at the party, it is because she is not invited.