“ . . . they went on their way, and the star they had seen in the east went ahead of them until it stopped over the place where the child was”. Matthew 2:9

The Epiphany story brings memories of children’s nativity plays; young people being dressed in silk gowns with crowns made from shiny paper; or, if not nativity plays, Christmas cards with men on camels, or carols telling the story of kings from the east, or poems about travelling in the dead of winter.

Just as we recall the traditional picture each year, so we should also try to recall a realistic picture of the men each year. Each year, we need to put away our traditional pictures of the Magi, we need to forget the silken robes and the elegant appearance, because if you were like that you’d get robbed no sooner than you were outside the city walls. Instead, we need to think of men in traditional Arab dress, because it was what was practical when you lived in that region. They were men used to surviving the elements, because to travel any distance in those times meant facing harsh and difficult weather. They would have been men who were wise to the ways of the crooks and the fraudsters and the knifemen who would relieve them of their possessions and leave them with their throats cut down some back alley because these were times before regular government and police forces. They would have been men speaking a string of different languages to make their journey to Bethlehem, because even daily life in Palestine might involve three or four different languages. They would have been hard men, men with skin like leather and hands like sandpaper; men constantly alert, constantly watching, missing nothing, always on guard.

If we recall a realistic picture of the Magi, we need also to be realistic about the consequences of their visit.

Learned men they may have been, but their behaviour seems fat from wise. They arrive and start publicly asking questions, ‘Where is the one who has been born king of the Jews? We saw his star when it rose and have come to worship him.’ Hardly a discreet or cautious way of speaking when a second’s thought would have made them realize that their questioning was likely to set alarm bells ringing. Word very quickly reaches the ears of Herod, the puppet ruler of Judea under the Roman Empire and he calls his own advisers.

Were careless talk not enough, the Magi then meet with in Herod in secret and share what they have learned. What did they think was going to happen? Did they really believe Herod’s claim that he wanted to worship a child born in obscurity? Did it not occur to them that their might be violent consequences? What sort of ‘wise’ men would act with such little thought for what might happen?

The full story of the involvement of the Magi does not end at Saint Matthew Chapter 2 Verse 11, in Chapter 2 Verse 16, Saint Matthew writes, ‘When Herod realized that he had been outwitted by the Magi, he was furious, and he gave orders to kill all the boys in Bethlehem and its vicinity who were two years old and under, in accordance with the time he had learned from the Magi’.

Did the Magi realize what would happen when in Chapter 2 Verse 12 they returned to their own country by another route? Did they ever hear tales of the murders that had happened? Did they hear of the grieving mothers? Did they ever think in the years that followed that they might have gone about things in a different way?

The political consequence of the visit of the Magi was death of the Holy Innocents, the spiritual consequence of their visit, for them and for us, was the message that the new born king was to be a king for all the people – the Magi represent us, ourselves, you and me.

The Bible up to this point has been about God’s relationship with a particular people, with the people of Abraham, the people of Israel, the Jews. Then this child in Bethlehem is born and the whole story is opened up. The Magi are Gentiles, they are foreigners, they are not part of God’s people, they do not share in God’s promises. But now all this changes, Jesus welcomes all who believe in him, whether Jews or Gentiles. We become one of God’s people not by being born as one but by believing in this Jesus. 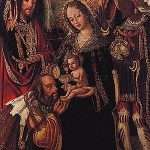