Beauty is a strange thing, it can allow a moment of escape from horror and ugliness. In one of the most profound books I ever read, the space of a single page in five hundred put the other four hundred and ninety-nine into a different context:

The hedgerows were deep and ragged where he walked, covered with the lace of cow parsley. The air had a feeling of purity as though it had never been breathed; it was just starting to be cool with the first breeze of the evening. From the tall elms he could see at the end of the field there was the sound of rooks, and a gentler calling of wood pigeons close at hand. He stopped, and leaned against a gate. The quietness of the world about him seemed to stand outside of time; there was no human voice to place it.

Above him he saw the white moon, early and low above the elms. Over and behind it were long jagged wisps of cloud that ran in ribbed lies back into the pale blue of the sky, then trailed away in gestures of vapourous white.

Stephen felt himself overtaken by a climactic surge of feeling. It frightened him because he thought it would have some physical issue in spasm or bleeding or death. Then he saw that what he felt was not an assault but a passionate affinity. It was for the rough field running down to the trees and for the pathgoing back into the village where he could see the tower of the church: these and the forgiving distance of the sky were not separate, but part of of creation, and he too, still by any sane judgement a young man, by the repeated tiny pulsing of his blood, was one with them. He looked up and saw the sky as it would be trailed with stars under darkness, the crawling nebulae and smudged lights of infinite distance; these were not different worlds it now seemed clear to him, but bound through the mind of creation to the shredded white clouds, the unbreathed air of May, to the soil that lay beneath the damp grass at his feet. He held tightly on to the gate and laid his head on his arms, in some residual fear that the force of binding love he felt would sweep him from the earth. He wanted to stretch out his arms and enfold in them the fields, the sky, the elms with their sounding birds; he wanted to hold them with the unending forgiveness of a father to his prodigal errant but beloved son . . . nothing was immoral or beyond redemption, all could be brought together, understood in the long perspective of forgiveness. As he clung to the wood, he wanted also to be forgiven for all that he had done; he longed for the unity of the world’s creation to melt his sin and anger, because his soul was joined to it.

The book was not a spiritual one, not even one by a religious author. It was Sebastian Faulks’ ‘Birdsong’. In the hideous grimness of the bloody slaughter of the First World War, Faulks’ character Wraysford is allowed a few days leave and encounters a moment of sublime beauty. One wonders if the BBC dramatisation of ‘Birdsong’ can evoke a sense of beauty similar to that conjured by Faulks’ prose. 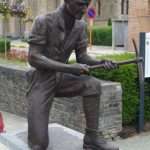