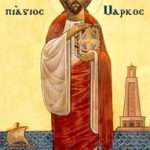 It is a feature of the Gospels that the writers tell us little about themselves; it is the message that matters, not the messenger.

When we look at Saint Mark’s Gospel, we cannot be certain about the identity of the author. There has been a tradition in the church of identifying the writer of the Gospel with John Mark, who appears in Acts Chapter 12 and Acts Chapter 13 but ‘On the Seventy Apostles’, a work attributed to a Roman Christian called Hippolytus, who lived 170-235 AD, suggests that there are three different Marks identified in the New Testament. There is John Mark; Mark the cousin of Barnabas, who appears in Colossians Chapter 4 Verse 10 and Philemon 24; and Mark the Evangelist, who is mentioned in 2 Timothy Chapter 4 Verse 11. Marcus, the Latin form of the name, was one of the commonest names in the Roman Empire so we cannot just assume that the occurrences of a name would necessarily all refer to the same person. None of the traditions can be conclusively proven from either the New Testament or from the writings of the early church.

Papias, who is said to have lived from before 70 AD until around 155 AD, quotes from an elder who told him about Mark,

“This also the presbyter said: Mark, having become the interpreter of Peter, wrote down accurately, though not in order, whatsoever he remembered of the things said or done by Christ. For he neither heard the Lord nor followed him, but afterward, as I said, he followed Peter, who adapted his teaching to the needs of his hearers, but with no intention of giving a connected account of the Lord’s discourses, so that Mark committed no error while he thus wrote some things as he remembered them. For he was careful of one thing, not to omit any of the things which he had heard, and not to state any of them falsely.”

Papias’ words help us in our understanding of what Mark intended; Mark is writing a Gospel, he is not writing a biography of Jesus. If we read Saint Mark Chapter 1 Verse 1, it says, ‘The beginning of the good news about Jesus the Messiah, the Son of God’. He has no intention of telling Jesus’ life story; he does not tell of Jesus’ birth or childhood or of the years before Jesus began his ministry, he begins with John the Baptist.

Scholars believe that the Gospel was written after the death of saint Peter in 64 AD and before the destruction of the Temple in Jerusalem in 70 AD. Although it appears as the second of the Gospels, it is believed that it was written first, and that Saint Matthew uses the writing of Saint Mark for much of the material in his own Gospel. Mark’s Greek is not as fluent as that of other New Testament writers and his Gospel is by far the shortest.

The biblical commentator D.E. Nineham suggests Saint Mark had a number of main concerns as he put together the Gospel:

(i) How was Jesus the Messiah? The faithful who would have heard Mark’s words read would have taken it for granted that Jesus was the Messiah, but how could this be reconciled with the Cross? How could what happened to Jesus be made to fit with all they had expected from the Messiah? What sort of Messiah ends up being crucified?

People had expected a warrior king, someone who would restore the kingdom to Israel, the Messiah, as David’s descendant, would bring back the glory days. Look at the Palm Sunday story and we see the crowds really expecting something dramatic, something history-changing is going to happen

Mark has two approaches. He takes a historical approach to what happened, he explains the crucifixion as a consequence of the opposition to Jesus. If we look at Mark Chapters 2 and 12, we see question after question, challenge after challenge from Jesus’ opponents. Jesus confounds the efforts of his opponents to catch him out with their questions and they turn viciously against him. He also takes a theological approach, showing God’s way of producing surprise results from unpromising beginnings, remember Jesus with the children in Mark Chapter 10 Verse 15, ’Truly I tell you, anyone who will not receive the kingdom of God like a little child will never enter it’.

Things are reversed with Jesus, the usual order of things is turned upside down. Jesus’ way of being the Messiah is different from anything they might have expected.

(ii) The second concern Mark seeks to address is that if Jesus was the Messiah, why did he not claim the title earlier and openly? Why didn’t he just stand up and tell everyone that he was the one for whom they had been waiting?

We see Jesus on repeated occasions in Saint Mark’s Gospel telling people whom he has healed not to tell anyone what has happened; it seems a strange way to behave? Aren’t the miracles meant to be signs of God’s presence? Mark sees what biblical scholars call ‘the Messianic secret’ as having a twofold reason: to silence the demonic powers that recognized him, in Mark Chapter 3 Verse 12, Jesus ‘gave them strict orders not to tell others about him’; and because of the obtuseness of the people, ‘He looked around at them in anger and, deeply distressed at their stubborn hearts’, says Mark in Chapter 3 Verse 5.

There is a purpose in the secrecy, Jesus is looking for faith among his followers, not for people who are swayed by the spirits or who can only be moved on from their stubbornness by something spectacular happening. Read Saint Mark and we see how he stresses this secrecy, this concern on the part of Jesus that people who recognize him should do so through the eyes of faith.

(iii) Thirdly, Mark needs to explain the persecution his community was suffering. We see in Saint Mark’s Gospel the point being made that Jesus had warned three times that he was going to suffer, in Chapter 8 Verse 31, Chapter 9 Verse 31, and Chapter 10 Verse 33 and that those warnings had come true.

Jesus warned his followers to expect to suffer for themselves, but promised that God would reward those who endured suffering, Chapter 10 Verse 29-30 says, ‘Truly I tell you,” Jesus replied, “no one who has left home or brothers or sisters or mother or father or children or fields for me and the gospel will fail to receive a hundred times as much in this present age: homes, brothers, sisters, mothers, children and fields—along with persecutions—and in the age to come eternal life’.

When we realize that Saint Mark was writing for specific purposes it is easier for us to see how his Gospel can read strangely at times, how there can seem to be things left out, how there can be great attention paid to some things and little paid to others.

Even the ending of Saint Mark’s Gospel raises questions, the earliest manuscripts end at Chapter 16 Verse 8, ‘Trembling and bewildered, the women went out and fled from the tomb. They said nothing to anyone, because they were afraid’. English Bibles have verses 9-20 added, usually with a note that the earliest and most reliable manuscripts did not include the final twelve verses.

It is an odd place to end, but if he was writing down Peter’s teaching, perhaps it makes sense. The Gospel tells the story up to the women finding the empty tomb, Mark and all the other members of the early church tell the story from that point onwards.

It always seems reassuring that there are rough edges in Scripture, they are a mark of honesty. If you were going to make a story up, you would tend to make sure all the pieces fitted smoothly together. It is human nature to believe those things where everything is consistent and nothing is contradictory. The fact that there are parts of the New Testament that might not be consistent with others, that might even contradict others, is a sign that people tried to set down honestly what they had received and what they believed. 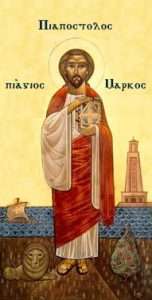