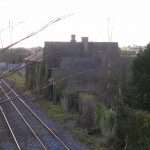 Mountrath and Castletown railway station was on the Great Southern and Western railway. It opened on 1 September 1848, and was on the main line from Dublin to Cork, the ‘Premier Line’ as it was called. A National Library of Ireland photograph from the turn of the Twentieth Century shows a fine country railway station; with sturdy buildings and an elegant wrought iron bridge taking one from the ticket office and waiting room building to the Down platform where Cork-bound trains stopped.

The extent of the buildings point to a once busy place, something more than just a halt. On the Up side there was a goods store, a loading bank and a siding are on the same side. Behind the Down platform there were a siding and another store and loading bank. It would not be hard to imagine cattle being driven along country roads for transportation by train to Dublin, or elegant Edwardians standing on the platform waiting for a train to the capital.

A problem with Mountrath and Castletown Station was that it was at neither Mountrath nor Castletown, it was in the hamlet of Kilbricken, three miles south of the homes of most of its potential customers. It seemed odd that anyone would build a railway line that did not pass through the town, perhaps there was some unperceived purpose in the building of the line where it was, perhaps its location would seem an obvious matter to those familiar with the history of the line.

Talking to a keen amateur railway historian, he suggested the reasons for a station three miles from the town were probably numerous. There may have been a desire to proceed as directly as possible from Dublin to Cork; there may have been landowners who did not a railway across their land; or landowners who did want a railway through theirs. The minutes from the contemporary company records would probably reveal the true reason, but, whatever it was the people of the town were left with a remote station that fell into disuse and was closed in 1976; decisions taken elsewhere meant the people of Mountrath would never see a train run through their town.

The fate of the station seems an allegory for contemporary Ireland.

There are those with power who have taken the decisions on how to proceed and whose plans take little account of the fate of ordinary people. If people are left isolated, passed by, ignored, then it is simply part of the process of the drive towards a destination. At least, the railway builders knew where they were heading, and knew what ground they must cross. Those controlling the direction of the country have no idea where it might arrive, and no little idea of what hazards along the route. (If one listens to the reasoning of David McWilliams’ ‘Punk Economics‘ series, then the line we are taking is leading us straight into a bog).

Mountrath and Castletown station presented a sad sight in the light of today’s spring sunshine – passed by and derelict. Optimism is needed to believe that the country will not share a similar fate. 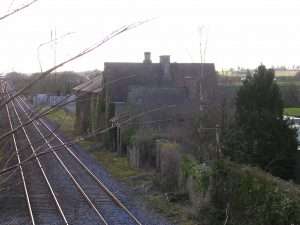