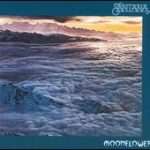 Reaching a town, the traffic lights remained a defiant red for an unwarranted length of time. A handful of toll-avoiding trucks rolled down the street, but it was otherwise quiet. Turning onto the main road, there seemed little custom for the pubs. The lights from the filling station tempted passing travellers; a place with particularly fine packets of crisps, one of which had once sufficed as an evening meal.

Passing the final street lights, the last light of early April clung in the sky out to the west over Co Tipperary; 9.30 pm and still not completely dark. In June, the light lasts forever.

‘She’s not there’ was played on the radio: Santana, a legend.

In 2008, a man in Nelson, British Columbia had had a photo of himself with Carlos Santana; an encounter that had been a special moment.

He kept a record shop, real records; 12 inch albums. It had been a dream place, every disc you could have imagined, and ten times as many that you could not have done. The Woodstock treble album had been a temptation, but the challenge of carrying it for the rest of the holiday and then a transatlantic flight seemed too much.

Nothing was bought, but the man loved his records and talked to everyone. His accent seemed different, but no so different.

‘I came here when I was eighteen. I’ve been here forty years.’

‘It was Nelson or Vietnam – Nelson seemed the better choice’.

He was the stuff of legends; the generation of those who had been at Woodstock, among those who had travelled north into Canada to avoid the futile slaughter across the Pacific. Since the 19th Century; Nelson had been a place for those seeking refuge from war and violence; he stood in a long tradition.

His record shop had seemed a place out of time; if Janis Joplin or Jimi Hendrix had walked in off the street, it would have not been incongruous, but they were long dead and their times long past.

‘She’s not there’ drew to an end, its final notes fading under the presenter’s voice. A legend for forty odd years and still not of pension age.

There must be legends now who will be legends in forty years, but it is hard to think of them.

The music changed to blues.