Argelès-sur-Mer is a Mediterranean seaside resort close to France’s border with Spain. Most of its buildings seem less than a generation old; its appearance differs little from the string of resorts that dot the coast as it curves eastwards. The dark days in its history would have remained unknown had it not been for a chance conversation last evening, an Englishman in his sixties talking about Argelès as a place where refugees from the Spanish Civil War being held on the beach.

Walking the seafront this morning, a memorial stone commemorates those who died. Only the Internet, reveals the full horror of the Retirada, the flight of hundreds of thousands of men, women and children from Spain, which by January of 1939 was under Fascist control.

France did not want the refugees and classified them as ‘foreign undesirables’, allowing them to be interned in compounds along the seafront. At Argelès-sur-Mer, up to a hundred thousand people were held in the woodland that adjoined the beach. No proper facilities, hardly any food, brutal treatment: thousands died between February and July 1939.

Even when the camp was dismantled, things hardly improved. Some returned to Fascist Spain, some ended up in forced labour groups; after the Nazi occupation, some were deported and were to die in extermination camps.

The memorial stone inscription is brief and to the point:

(To the memory of the 100,000 Spanish republicans, interned in the Camp of Argelès, during the RETIRADA in February 1939. Their misfortune: to have fought to defend democracy and the republic against fascism in Spain from 1936 to 1939. Free Men, remember them).

Walking among the Argelès trees, it was hard to imagine the horrors of the place. Did the revellers from the seafront discotheques and bars ever have any realization that the ground on which they stood had been a place of mass suffering and death?

History in school days was always a simple matter; the bad guys might win battles, but the good guys always won the wars. Except even in school days, everyone knew that wasn’t true; everyone knew that the people of Eastern Europe had little to be celebrate, everyone knew that republics that had emerged after the First World War were stamped on by Communist invaders. Had we thought about it, we would have drawn a similar conclusion about Spain. The hopes of democracy were betrayed, the dictator Franco allowed to remain thirty years more. His continuing presence was a matter of convenience for Western powers.

Argelès-sur-Mer is a reminder, if one were needed, that politics is about mostly about power and rarely about principle.

Of course, we shall remember the dead of Argelès, as long as it asks nothing of us. 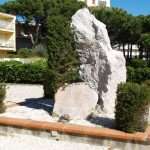