Nine days to go and the referendum campaign intensifies. The Government and the Opposition parties warn of the dire economic consequences if Ireland does not say ‘Yes’ to handing over further elements of its independence. The ‘No’ campaigners, resisting a further ceding of national sovereignty to a German-dominated Europe, comprise unlikely bedfellows, Sinn Fein and the hard Left, along with right-wing elements supported by Britain’s United Kingdom Independence Party.

Being a non-national, still carrying a British passport, no decision needs to be made; the electorate is confined to those who are citizens of the state. But one might wonder about the point of the referendum, the Treaty will be implemented with the consent of twelve member states, Ireland’s vote is immaterial to the final outcome. Even the timing is strange, why hold a vote in May when ratification is not due before 31st December? Why rush to decision when the new French president is looking for changes in the terms of the Treaty?

The more fundamental question is whether ordinary people matter at all.

Mary died in 1998, old and full of years. Faced with the referendum, Mary would probably have retold her favourite story, a story that summed up her attitude to politicians.

It was the day of the 1992 General Election and I called with Mary, who was still short of being 90 at the time.

‘Who do you think will win the General Election, Mr Poulton?’ she asked.

‘On the night before the Battle of the Boyne, a boatman was rowing King William across the river.

‘Do you think you will win tomorrow?’ the boatman inquired of the king.

‘Win or lose,’ replied the king, ‘you will be the boatman still.’

‘Mr Poulton, we will be the boatman still’.

Twenty years ago, before the political disillusionment induced by the years of Tony Blair in Britain and Bertie Ahern in Ireland, I would have thought Mary’s story was unduly cynical. Surely, people made a difference? Surely, we were more than just ballot box fodder?

Yet Irish voters know that when governments get the wrong result in a referendum, they hold another one to get the right one. Interviewed on radio last week, minister Richard Bruton was asked what would happen if the treaty was rejected, Bruton’s response was, ‘We will have to say we will need access to this fund and I think Ireland will be looking to say, can we vote again?’ Bruton later retracted the comment and the government stated there would be no second referendum, but the slip betrayed the fact there were thoughts that many people had anyway suspected: have the referendum in May to allow the possibility for another in the autumn.

The voters will be the boatmen still. 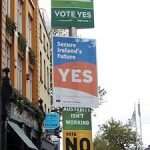