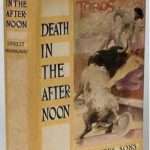 Jazmin the bull was granted an ‘indulto’ at the corrida at Mont-de-Marsan on Friday. The bull’s life was spared after it had fought in the ring with exceptional courage – an indulto is exceedingly rare.

Mont-de-Marsan is not in Spain, it is in the department of Landes in south-west France. For someone to whom the bull ring is a shopping centre in Birmingham, it came as a shock when holidays in the area meant discovering bull rings in almost every town (and even in some villages). Nor is it the case that the bull rings are only in the departments close to the Spanish border. Across much of southern France, bullfighting is part of popular culture. As far east as the ancient city of Arles in Provence, corridas take place as part of local festivals.

An Englishman met at a French rugby match one August said he had attended the corrida at Dax, the other main town in the department of Landes, with friends one evening, out of curiosity. Dax has a huge annual feria. During the six days some 800,000 people visit the town for the festivities, which do extend beyond bull fighting, but the ring is the culmination of each day’s activities. Tickets for each evening are snapped up. There is even a scoring system which seems to run from silence, through a salute, one ear, and two ears, and culminates with a tail. The feria is a sea of Basque colours, everyone dresses in white shirts and trousers and wears a red neckerchief. The Englishman, answered my question about what happened if you felt awkward about turning up not properly dressed. ‘They have even thought of that – you can buy a white tee shirt and red neckerchief for €13’. He had been lucky to get a ticket, for which he had paid €40 to a tout, but had been mystified that its face value was considerably cheaper than those of his friends. Reaching the ring, he discovered that while they were in the shade; he caught the full force of the late afternoon sun, leaving him as red as the neckerchiefs the next morning. ‘The last time I go to a bullfight’, he muttered.

Sud Ouest, the regional daily, carries reports on the fights, in print and online. What seems strange in looking at the pictures is that the ring seems a place for all the family; the crowd seem to comprise thousands of people of all ages. Perhaps they grow up with a less sensitive disposition than their peers in Northern Europe.The feria in Dax brings to the ring tens of thousands of people, along with choirs and bands; the atmosphere must be extraordinary.

It always seems sad to a sentimental Englishman that such a vibrant occasion is marred by the killing of animals. In ‘Death in the Afternoon’, American writer Ernest Hemingway saw bullfighting as an elemental expression of life and death; it seems a refined view of something more visceral. But when once expressing reservations, a friend asked me if I had ever been to an abbatoir. Perhaps we each have our own ways of cruelty.