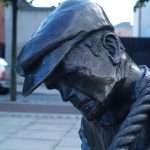 There is a moment in Monica Ali’s ‘Brick Lane’ when Chanu, the husband and father of the household, decides to take the family on a visit to London. It seems an eccentric decision, don’t they live in London, anyway? But off they go to see the city, as if strangers visiting it for the first time.

Reading the novel, the idea of visiting your own place did not seem so strange. Working in an Ulster parish that dated from the days of Saint Patrick, an anniversary festival in 1995 included a bus tour of the parish, not for outsiders, but for the parishioners themselves. An archaeologist from Queen’s University was numbered among the people of the parish and was our guide for the tour. An Ulsterbus was hired and, at the most distant point, from where we started we must have been three miles from where we had begun. What had seemed a piece of silliness when it was planned, became an experience people were to remember. Each pile of stones, each fold in the hill, each grassy mound suddenly assumed an identity of their own. Standing at the gate of a field’ in which a single wall standing alone was all that remained of a medieval building, he described the archaeological digs that had taken place there and how what was found told the story of the everyday lives of the people who had lived there. A place passed everyday became more than just a stone wall in a meadow.

Moving from Dublin two years ago, having lived on the southern edge for eleven years, there is a sense now of returning to the city as a stranger; neither accent nor address hint at a decade in the capital. Occasionally the Co Wicklow registration of the car is a cause for comment on Midland farms, but outside the members of the parish, often there is an assumption that I had arrived from the North, or from England. To return to Dublin as a visitor, as Chanu ventured out on his tour of London, demands no great effort; carry a camera, and the appearance of being a tourist is complete.

Only my son thinks it odd that I should appear thus, “Dad,why do you have a camera? This is Dublin. You lived here.”

“Because I see things now that I did not see before”.

It did not sound convincing. Of course, I must have seen them, it’s just that I did not notice them. It’s like hearing and listening. For the first time today, I stopped to look at the sculpted face of the lineman on City Quay. Previously, I had even photographed him, but had never stepped onto the river side of the statue to look into his face.

There must be many more new things to see next time I am there. 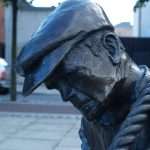