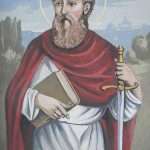 ‘Paul, an apostle—sent not from men nor by a man, but by Jesus Christ and God the Father’ Galatians 1:1

It would be possible to devote an entire thirteen week series to looking at Saint Paul’s Letter to the Romans and only to have scratched at the surface of what Paul was writing. To attempt to look at Saint Paul’s letters to the churches in a single view means catching no more than a tiny glimpse.

There are three things we should note at the outset. Firstly, the letters as they appear in our Bible are not in the order they were written, the first letter, and the oldest book in the New Testament was the letter we now call First Thessalonians. Secondly, there are at least three of the letters, Ephesians, Colossians, and 2 Thessalonians being prime examples, where many scholars question whether Paul was the writer or whether they had been written in Paul’s name, often at much later dates. Thirdly, the account of Saint Paul’s conversion on the road to Damascus written by Saint Luke in the Acts of the Apostles does not fit with what Paul himself says about his conversion and what followed in the Letter to the Galatians.

Scholars have spent years studying, discussing and disagreeing about the details of the dates, of the authorship, and of whether or not Luke is a reliable witness; sometimes the disagreements are vehement. What seems important, though, is not the detail, but the message of the letters. The early church included these letters in the canon, the list, of the books of the New Testament because it believed the letters carried important truths.

Following the order of the letters as they appear in the New testament, we begin with the letter to the Romans. Written in the mid-50s AD, Romans is the longest of Paul’s letters and is deeply theological.

Paul’s letters are written in response to the situations and the situation in Rome was difficult. The church had begun with members of the Jewish community in the city who had accepted Jesus as the Messiah, but who wished to retain the traditions they believed God had given to their people. The growth of the church among those who were not Jewish brought in people who did not accept the old Jewish traditions but wished to be equal members of the church.

Paul’s message in the letter is that salvation does not come through observance of the Law but through faith in Jesus Christ. The letter was to be of major importance for Martin Luther and the Protestant Reformers as they sought to recall the church to its Scriptural roots. William Tyndale wrote, ‘The sum and whole cause of the writings of this epistle, is, to prove that a man is justified by faith only’.

The First and Second Letters to the Corinthians are all we have of four letters Paul seems to have written to the Christians there. In the first letter, in Chapter 5 Verse 9, Paul says, ‘I wrote to you in my letter’; it was a letter about with whom they should associate. Next came the first letter and then in Second Corinthians Chapter 2 Verses 4, Paul says, ‘For I wrote you out of great distress and anguish of heart and with many tears’. This is not a description of First Corinthians, he must have written another letter between it and Second Corinthians.

Paul wrote First Corinthians to correct what he saw as errors in the church there. Reports have reached him of divisions among the believers, so, in Chapter 1 Verse 10, he writes, ‘that all of you agree with one another in what you say and that there be no divisions among you’. Division in the church at Corinth is obviously a problem and Paul takes on the question from the outset. Christian teaching in Corinth has been diluted by other teaching prompting Paul to ask in Chapter 1 Verse 21 ‘Has not God made foolish the wisdom of the world?’ Paul’s purpose in the letter is to call people back to the original Good News.

By the time of the Second Letter to the Corinthians, the situation in the church at Corinth is still not happy. ‘So I made up my mind that I would not make another painful visit to you’, writes Paul in Chapter 2 Verse 1. He feels he is under attack, that his authority is being challenged, asking in Chapter 3 Verse 1, ‘do we need, like some people, letters of recommendation to you or from you?’ Paul has to restate the basic teaching of the new covenant made through Christ and the hope of the resurrection. In Chapter 5 Verse 20, he pleads with the Corinthian Christians, ‘We are therefore Christ’s ambassadors, as though God were making his appeal through us. We implore you on Christ’s behalf: Be reconciled to God’.

Verses from the opening chapter of the letter to the Galatians challenges Saint Luke’s account of Paul’s conversion, after being called by God Paul says, in Chapter 1 Verse 17-20, ’I did not go up to Jerusalem to see those who were apostles before I was, but I went into Arabia. Later I returned to Damascus. Then after three years, I went up to Jerusalem to get acquainted with Cephas and stayed with him fifteen days. I saw none of the other apostles—only James, the Lord’s brother. I assure you before God that what I am writing you is no lie’.

The letter to the Galatians deals with the persistent question of whether Christians were to be subject to the Jewish Law. While teaching them that they are free from the Law, Paul is anxious about how that freedom be used. He writes in Chapter 5 Verses 13-14, ‘You, my brothers and sisters, were called to be free. But do not use your freedom to indulge the flesh; rather, serve one another humbly in love. For the entire law is fulfilled in keeping this one command: “Love your neighbour as yourself.’

In the letter to the Ephesians, Paul is again addressing the question of the division between Jewish and Gentile believers. Speaking to the Gentiles, he says, in Chapter 2 Verses 12-13, ‘remember that at that time you were separate from Christ, excluded from citizenship in Israel and foreigners to the covenants of the promise, without hope and without God in the world. But now in Christ Jesus you who once were far away have been brought near by the blood of Christ’.

Paul seems concerned at the behaviour of some of those at Ephesus, giving specific instructions to particular groups of people. At the heart of Paul’s teaching is love and self-sacrifice, ‘Follow God’s example, therefore’, he says In Chapter 5 Verse 1-12, ‘as dearly loved children and walk in the way of love, just as Christ loved us and gave himself up for us as a fragrant offering and sacrifice to God’.

The letter to the Philippians was written to the church at Philippi, possibly the first church to be founded in Europe. The Christians at Philippi have been very attentive to Paul’s teaching and are commended for their faithfulness. Paul warns the church against the enemies of the cross of Christ and urges them to continue to follow good examples. ‘Rejoice in the Lord always. I will say it again: Rejoice!’, he says in Chapter 4 Verse 4. Joy is at the heart of their faith and at the root of the strength of their church.

The letter to the Colossians is addressed to a church that has been influenced by pagan beliefs. In Chapter 2 Verse 8, Paul writes ‘See to it that no one takes you captive through hollow and deceptive philosophy, which depends on human tradition and the elemental spiritual forces of this world rather than on Christ’. He stresses Christ’s supremacy over the universe and that faith is about conduct as well as belief, ‘Put to death, therefore, whatever belongs to your earthly nature’, he instructs in Chapter 3 Verse 5. In the closing lines, in Chapter 4 Verse 16, he writes, ‘After this letter has been read to you, see that it is also read in the church of the Laodiceans and that you in turn read the letter from Laodicea’. We can only guess what the Laodicean letter might have said.

The First Letter to the Thessalonians is probably the first written book in the New Testament. Timothy has visited the church and returned with a report that is encouraging, but that also shows a misunderstanding of the faith. Paul urges a deeper faith on the part of the church, writing in Chapter 3 Verse 10, ‘Night and day we pray most earnestly that we may see you again and supply what is lacking in your faith’. He warns them to be careful in their conduct and to be clear in their understanding of what the resurrection means, declaring in Chapter 4 Verse 13, ‘Brothers and sisters, we do not want you to be uninformed about those who sleep in death, so that you do not grieve like the rest of mankind, who have no hope’.

True teaching and correct conduct are themes running right through the letters to the churches and the Second Letter to the Thessalonians is concerned with the false teaching that Christ has returned. Paul explains this is not the case and in Chapter 2 Verse 15 urges, ’So then, brothers and sisters, stand firm and hold fast to the teachings we passed on to you, whether by word of mouth or by letter’. As he draws to a close, Paul gives advice that promotes discipline and unity, in Chapter 3 Verses 14-15, he writes, ‘Take special note of anyone who does not obey our instruction in this letter. Do not associate with them, in order that they may feel ashamed. Yet do not regard them as an enemy, but warn them as you would a fellow believer’. Paul’s advice is as relevant now as twenty centuries ago.