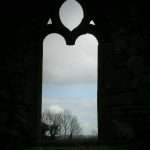 Standing in the farmhouse kitchen, the lady of the house lifted a kettle from the range. ‘You don’t seem to fall out with people’, she said. It seemed an odd comment; it was hard to know whether it was a compliment or a complaint.

‘It is not my place to fall out with people. What was it that Saint Paul said about becoming all things to all people in order that some might be saved?’

What expectations do people have of clergy that not falling out with people is worthy of comment? What experiences have they suffered?

In his book In God We Doubt: Confessions of a Failed Atheist broadcaster John Humphrys remembers his father as not being very favourably disposed towards clergy,

‘That can probably be traced to an experience he had as a young man when he was staying with his aunt at her little cottage in a Somerset village not long after the First WorId War had ended. They were about to sit down for Sunday lunch when the door burst open and the vicar strode in. Without so much as a by-your­leave, a tap on the door or even ‘Good morning’, he demanded to know why my great-aunt had not been at the morning service. She did a little bob – not quite a curtsy, but not far from it – and stammered some sort of apology. She tried to explain that she seldom had visitors and she’d been busy preparing lunch for her nephew whom she hadn’t seen for a year and who had come from a long way away (the other side of the Severn estuary) but she’d make sure to turn up for evensong. He was having none of it. He barked at her, ‘See that you do! Don’t let it happen again!’ and marched out without another word. He did not even acknowledge the presence of her guest.

My father was outraged and remembered that en­counter in minute detail until his dying day. How dare the vicar treat his aunt with such disdain – exactly like a lord of the manor dealing with a serf! But those were the days of deference, especially in a rural backwater like Wellow in Somerset, when the working class knew its place and would never have dared to stand up to the authority of the vicar’.

As someone who grew up in a working-class family in a rural backwater of Somerset, the story told by John Humphrys’  is reassuring, this was how working-class people experienced the church; it was not something I imagined in my youth. Not falling out with people might reflect a desire to follow Saint Paul’s instructions, or it might just arise from childhood memories.