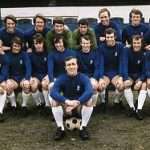 For some reason, the ‘Daily Telegraph’ emails a round up of the weekend soccer scores in England. Among other things, it told me that West Bromwich Albion had beaten Chelsea in the premier division of the English football league. At one time, the score would have caused me angst, such days passed some time ago.

At the age of nine I made a decision that in later years would bring me a considerable degree of anguish and ridicule. I changed the football team I supported. Until May 1970 I had taken pride in the claret and blue colours of West Ham United, not that you ever knew what colours they were playing in on a block and white television. West Ham had seemed an obvious choice they had the England captain Bobby Moore and the 1966 World Cup hero, Geoff Hurst. But they weren’t flashy enough. 1970 was a time of outrageous glamour and fashion and the east end of London was neither glamorous or fashionable.

I was tempted away by the style and flair of the west London club Chelsea and also, much more importantly, by the fact that they were in the FA Cup final.

A quarter of a century of disappointment and abuse was to follow. Relegation in 1975 and 1979, a struggle to stay in the Second Division in 1983, sometimes it was easier to talk about cricket.

I remember travelling to Chelsea matches when I was a sixth-former in the late 1970s. To buy a return ticket from Castle Cary in Somerset to London, to travel by tube from Paddington to Fulham Broadway, to buy lunch in a pub, to get into the match, and to buy egg and chips for tea at Paddington station, cost just under £10. It sounds a laughable sum of money, except it cost me most of what I earned in a month. I had a job pumping petrol from 8 till 1 on Sunday mornings earning 60p an hour, £12 a month – £10 in a day was a big commitment.

Liverpool manager Bill Shankly once said, ”Some people believe football is a matter of life and death, I am very disappointed with that attitude. I can assure you it is much, much more important than that.’  Bill Shankly was a marvellous man and manager, but his perception of reality was slightly askew. The result of a football match made not one jot of difference to whether someone had a home to live in, whether they had food on the table, whether they had treatment for an illness, whether it was safe for their children to walk the streets.

Preparing to travel to Rwanda and Burundi next week, the result of an English football match is fairly insignificant.